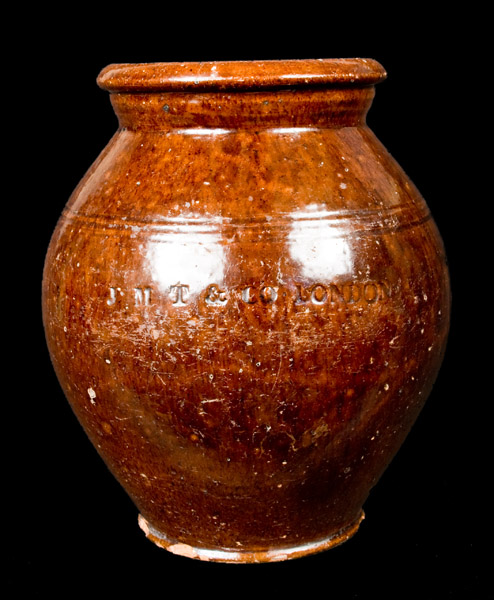 A rare Ohio redware jar will be sold in our April 10 auction. Consigned by a woman in Ohio, the 8 1/2″ ovoid-formed pot features a rounded foot, heavy tooling around the shoulder, and an unusually-shaped flaring rim. The surface is covered in a reddish-brown lead and manganese glaze, typical of most redware produced in America throughout the late 18th and 19th centuries. Most significant about the jar is the large impressed maker’s mark, “J M T & CO / LONDON,” which extends across the midsection.

The initials “J M T” refer to potter, James M. Thompson, Jr., of London, Ohio. Born in 1786, Thompson was the younger brother of John W. Thompson, patriarch of the Thompson family of potters active in Morgantown, WV for most of the 19th century. James’ nephew, and perhaps the most well-known member of the family, was David Greenland Thompson, who produced a large number of stoneware pieces with cobalt people decorations around the year 1870, which are highly prized by collectors today. Much of what is known about James can be found in the well-researched article “The Potters and Pottery of Morgan’s Town, Virginia,” by Don Horvath and Richard Duez, featured in the 2004 edition of Ceramics in America. According to Horvath and Duez, Thompson likely learned the potting trade from Jacob Foulk in Morgantown around 1804. Though no apprenticeship records have been found, Thompson’s involvement in a court case against Foulk suggest a relationship between the two (Horvath and Duez, p. 121). Another book entitled “The History of Madison County, Ohio,” which was written in 1883, offers additional insight into Thompson’s potting career. According to this book, he traveled to London, Ohio in 1813, and established a pottery there in the same year. He was one of the first settlers in the town of London, and, judging by the early date of his arrival, may have been one of the earliest potters in all of Western Ohio. A lawyer named John Dungan, who traveled through London in 1835, described the town as having “two potteries. . . one located on South Main street, in the rear of the present residence of Judge Clark, carried on by James M. Thompson, and the other located on the site of the Presbyterian Church carried on by W.W. Burchnell.” (A signed redware jar by William Burchnell exhibiting Morgantown influence was sold by Crocker Farm, Inc., in July of 2009.) As further noted by Horvath and Duez, Thompson is listed in the 1850 U.S. Census for Mt. Pleasant Township, Madison County, Ohio, as a potter, age sixty-four, born in Virginia, living with his wife, Sarah, also a native Virginian ( Horvath and Duez, p. 121).

While Thompson’s career in Ohio spanned forty years or more, Horvath and Duez note that no examples of his work from Morgantown or London were known as of the publication of their article. This jar is the first signed product of this potter to have surfaced. Earlier this year, we received photos from a woman in Ohio, who inquired about consigning the jar. We were instantly intrigued by the impressed word “LONDON,” after having sold a jar by potter, William Burchnell, from the same town. We believe the ovoid form and stylish rim date it to somewhere around the year 1830. The impression of the mark across the midsection is unusual for any early American pottery, and suggests that Thompson wanted his business name to be very noticeable, literally “front and center” when his pots were used. The length of the mark also suggests he may have used a coggle wheel, rather than a very long rectangular stamp, which would be more difficult to apply against a heavily-curved surface. The Morgantown Thompsons were very familiar with such tools, where they were frequently used on both stoneware and redware to ornament a vessel’s shoulder and handles. Several coggle wheels from the Thompson family’s Morgantown operation have survived, and are currently in the collection of the National Museum of American History in Washington, D.C.

New discoveries in stoneware and redware are one of the more exciting parts of this business. With each newly-found maker’s mark comes greater insight into the tastes of a specific potter. And as with any antique, just one signed “missing link” piece can help put a name on thousands of otherwise unattributable works. 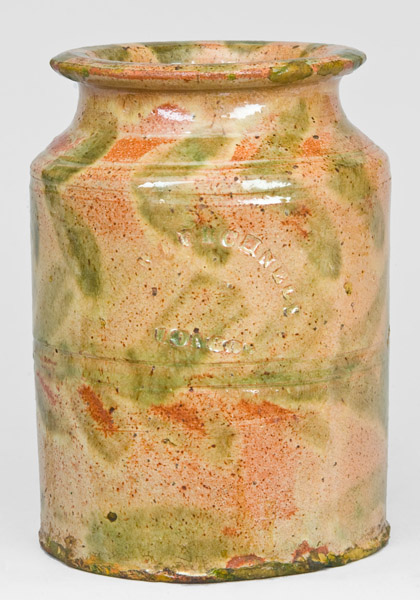 A redware jar featured in our July 11 stoneware and redware auction is both extremely rare and important to the study of American pottery. The jar, stamped, “W. BURCHNELL / LONDON,” is one of the only known vessels signed by William Burchnell of Madison County, Ohio, and, therefore, serves as an important resource for understanding the type of redware manufactured by this potter in particular and early western Ohio earthenware potters in general.

When a collector consigned this redware jar to our auction, we initially searched our library of books on American potters for any information on potters named Burchnell. Finding this potter to be undocumented, we started guessing about the origin of this jar. With only the town name of London listed in the maker’s mark, we assumed that this jar was probably made in a New England town, possibly London, NH. However, we also saw similarities between this vessel and redware jars manufactured in Morgantown, VA (now WV).

An 1883 book, The History of Madison County, Ohio, answered some of our questions about this jar. According to this book, John Dungan, Esq., came to London, OH, in 1835 and recorded information about the town. According to this information, “There were two potteries in the village, one located on South Main street, in the rear of the present residence of Judge Clark, carried on by James M. Thompson, and the other located on the site of the Presbyterian Church carried on by W. W. Burchnell.”

Further research in Ohio Census and Death Records revealed additional information about Burchnell. He was born in the 1790s in Virginia, arrived in London, OH, before 1830 and lived there until at least 1840, judging by Census records. By 1850, William Burchnell had passed away, leaving his widow, Mahala, raising six children.

However, what makes William Burchnell more significant than an obscure, short-lived Ohio earthenware potter is the style of his ware as well as the larger potting community he participated in. As I mentioned, the Burchnell jar featured in our July 11 auction shares a lot of similarities with Morgantown redware (see Horvath and Duez, “The Potters and Pottery of Morgan’s Town, Virginia,” Ceramics in America 2004), notably its form and horizontal tulip decoration.

These similarities are more than coincidental. The other earthenware manufacturer in 1830s London, OH, was James M. Thompson, younger brother to the patriarch of Morgantown’s Thompson family of potters, John W. Thompson. According to Horvath and Duez, James M. Thompson “almost certainly had begun training with [Morgantown earthenware potter] Jacob Foulk Jr. about 1804” (see Horvath and Duez, p. 121).

According to The History of Madison County, Ohio, James M. Thompson took his Morgantown potting training and settled in London, OH, in 1813, at the fairly young age of 27. Among the first settlers of London, Thompson was also undoubtedly one of the first established potters in western OH. He continued operating in London until at least 1850, according to Census records. As one of the region’s first earthenware potters, as well as one of its longest tenured, James M. Thompson’s Morgantown-style of earthenware production could have possibly defined the type of pottery manufactured in early western Ohio’s cultural blank canvas. With hardly any signed examples to draw conclusions from, it is quite possible that some of the unsigned ware attributed to Morgantown actually originated from this overlooked region of pottery production.

When analyzing the Burchnell redware jar in our upcoming auction, it is important to note that it was made in this potting community with roots in Morgantown, VA (now WV). However, Burchnell’s ties to Morgantown may grow deeper still. According to the death records of Burchnell’s children, William Burchnell was born in Virginia. Along with the fact that he established a neighboring pottery to James M. Thompson, this information indicates that William Burchnell very likely began his potting career in Morgantown. Burchnell possibly trained alongside James M. Thompson and followed his footsteps to Western Ohio when the appropriate time came. With more research necessary, the significance of Burchnell to American earthenware potting history is proving to be greater than an unknown potter, who fortunately signed his wares.