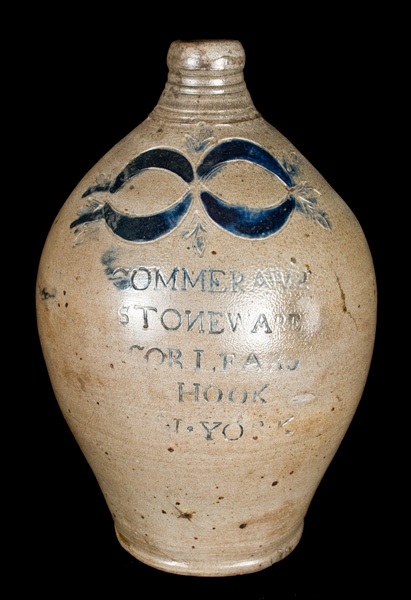 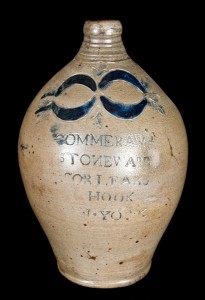 The stoneware of Thomas Commeraw, made in Corlears Hook, on the East River in New York City, has been valued by historians and collectors for about as long as any stoneware made in the United States. The work of the early Manhattan potters was some of the first to be recognized as important American material culture, way back around the turn of the twentieth century. At that time, authors and students had it pretty easy–a lot of the potters we now write about and spend a great deal of time trying to research were actually alive back then. But the work of the Croliuses, the Remmeys, Thomas Commeraw, and David Morgan in New York all caught the eye of people interested in decorative arts, early on. A lot has been written about their work, and about the men themselves. One of my favorite books on American stoneware, William Ketchum’s Potters and Potteries of New York State, 1650-1900, has been the definitive work on the Manhattan potters, and the entirety of what we have known about Thomas Commeraw, in particular, is encompassed in that work. Not at all a criticism of Ketchum and his near-exhaustive work, but there was something he and the scores of other authors who have written about Commeraw missed.

Thomas Commeraw was not another potter of European descent working beside the Croliuses and Remmeys. He was a free African American. I discovered this fact some time ago by chance and at the time I was so shocked by this revelation that I wondered if there were two different Thomas Commeraws running around Manhattan during the time period. But there were not, and since then I have spent a lot of time trying to flesh out the life of this man whom history forgot. I believe Commeraw’s story demands nothing less than a book on his life and work, and I will be finished writing this book soon. I have launched a website, www.commeraw.com, to keep those interested in my project updated on its progress, and to enable people to easily contact me. At this time, I am asking for your help. I have many photographs of Commeraw’s work, but I am trying to amass as large of a photographic record of his pottery as possible. I am also looking for pieces by David Morgan, his fellow potter in Corlears Hook, and the fairly well-known pieces stamped “COERLEARS HOOK” and incised with elaborate floral decorations. In many cases I can travel to you, and in some cases I will ask for you to mail or email me photos. If you attend our regular auctions in York, Pennsylvania, or would like to in the future, I can have your pieces photographed conveniently there, as well. I of course promise complete discretion and anonymity. If you are interested in helping me by providing photographs, please feel free to contact me: http://www.commeraw.com/contact.

I invite you to visit my website, www.commeraw.com, and thank you in advance for your interest and for helping me restore Commeraw’s deserved place in American history. 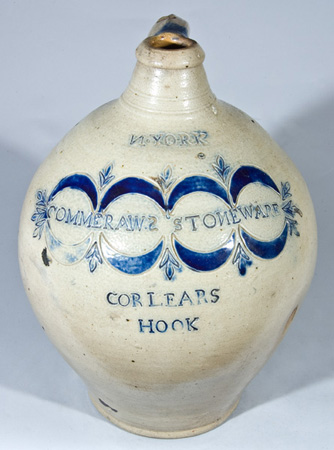 The question of a potter’s intent as he made a particular piece is a central one in the field of ceramic study. Even on the most straight-forward example, such as a plain, unadorned jar or jug, questions that can often never be answered conclusively rear their heads: What was it made for? Did it have one specific use, or many? What tools were used, and why? What level of standardization was expected within any given pottery during a specific time period? Was it made for a particular client? Who made it?

When decoration or other more elaborate attributes are added to the equation, the line of questioning extends itself that much more. What is the decoration supposed to represent? Was the decoration part of some kind of standardized design theme produced by the pottery? If so, was this an attempt at “branding” by the pottery owner, was it simply a mass production technique, or was it both? If the decoration is a variation on a theme by another pottery, was this done as a way to capitalize on someone else’s successful brand?

The large number of questions that can accumulate for even some of the seemingly simplest pots highlights the complexity in evaluating American stoneware and redware, and all art, for that matter. One important aspect of American stoneware production that factors into our evaluation of it is the business side of this decorative art form. The Thomas Commeraw jug we recently received for our July 11, 2009 auction is a good example of a piece that seems to have been made with commerce heavily in mind.

The Commeraw jug is one of the most finely made of any of his extant vessels. The contrast between the rich, dark cobalt blue against a very light gray colored body must have been at or very near the ideal appearance Commeraw sought as he fired it. The clay itself looks like it was specifically chosen or refined to be low in impurities and iron oxide, which contributes to the brown look of some stoneware. Each impressed letter and decorative element was applied deeply and with great care, to make them extraordinarily legible. The vessel itself is very well-thrown–a large, bulbous shape culminating in a pronounced, tooled spout. All of these attributes beg the question, why was this particular vessel so extraordinarily well-made?

Most other surviving Commeraw examples are a brown or tan color, though some achieve an attractive blue-on-gray that comes close to, but falls short of, that seen on this example. The crescent and tassel designs are often stamped in a more haphazard manner and can be harder to make out than in this case; the same goes for the maker’s stamps. In fact, the maker’s mark itself was very carefully applied to apparently communicate a specific message: “N. YORK” is impressed directly below the spout, giving a prominent place to declare the jug’s city of origin. Beneath that, encompassed by the striking, blue-highlighted decorative stamps, is the maker’s brand name, “COMMERAWS STONEWARE,” displayed with the confidence that the viewer will be impressed with the artist’s work. Finally, “CORLEARS / HOOK” lists the section of Manhattan on the East River where Commeraw potted.

Throughout his work, Commeraw made use of the many different combinations of words available within the repertoire of his maker’s stamps, which this jug displays in its entirety. “COMMERAWS” on one side of a vessel with “STONEWARE” on the other, simply “COMMERAWS / STONEWARE” or “CORLEARS / HOOK,” the name “COMMERAWS” alone–all sorts of variations of these marks were used by this prolific potter. Sometimes little import is apparent within the particular chosen combination, but in other cases the specific wording seems carefully selected. For instance, pieces stamped with “CORLEARS HOOK” but not “N. YORK” may have been made specifically for a local New York clientele.

Here, the prominent placement of “N. YORK” beneath the spout may indicate that the jug was made for customers far away from Manhattan. If so, Commeraw probably meant not only to communicate its city of origin, but to conjure into a potential customer’s mind the implications a New York hallmark carried with it.

New York stoneware seems to have been generally regarded as a standard-bearer of American stoneware production. The stoneware potteries of the Manhattan Crolius and Remmey families were some of the first firmly established in the United States, and carried a reputation not only as venerated, established companies but as part of the larger, extremely well-respected network of New York craftsmen. In 1812, when prominent Baltimore merchant William Myers hired New York stoneware potter Henry Remmey, Sr. to manage his Baltimore Stone Ware Manufactory, he bragged in local papers that he had “engaged Mr. Remmey, of New York, to superintend the Factory.” Subsequent ads by the Myers family over the next decade continued to stress Remmey’s New York heritage. The names of specific New York stoneware makers were probably known up and down the east coast, as well. For instance, in 1828, J.B. Cross, a Portland, Maine, merchant advertised “a large assortment of ‘Croliu’s’ [sic] New York painted, superior ware” in his local paper. In the same ad, which included many different consumer goods ranging from mustard to rat traps to toy soldiers, he boasted that he was “agent for several extensive New York manufactories.”

This claim is important in trying to ascertain the relationship between local pottery shops and distant merchant stores, and may help explain Commeraw’s intentions as he made this particularly fine example of his work. The jug was found in a barn in North Carolina, where it had apparently been kept hidden away for a long time. While pieces frequently migrated throughout the country over the past 200 years, items discovered in the manner this one was are often “native” antiques–objects resident in their current locale since around the time they were made. All of the notable attributes of this jug–the large size, exceptional craftsmanship, emphasis of its New York origin, and brilliantly emblazoned maker’s name–lead me to believe that it was made for a local Southern U.S. market to advertise the kind of high-quality, New York ware a particular merchant had to offer.

As I said at the beginning of this article, the question of what the potter had in mind as he produced a particular piece is usually one we can never completely answer. In the case of the Commeraw jug, any attempt to explain its specialness certainly falls into the category of conjecture. But I believe the circumstantial evidence is strong that this jug was made with the intent of advertising Commeraw’s New York-manufactured stoneware, to show a Southern market what he was capable of. In fact, in not just this case but also that of his entire body of work, Commeraw’s use of “CORLEARS HOOK” in his maker’s mark seems like an attempt at furthering his brand name and separating himself from the venerated Crolius and Remmey potteries located in lower Manhattan. Also, the backwards “N” in “N YORK,” not seen on other examples, may indicate that this jug was made earlier in the potter’s career than most other extant pieces, when he was still establishing himself as a pottery owner.

The relationship between stoneware potteries, local merchants, and distant merchant-agents is one that has not been explored as much as it could be. I believe the more we come to understand about this commercial side of stoneware production, the better we will be able to evaluate the surviving objects these artist-businessmen produced.