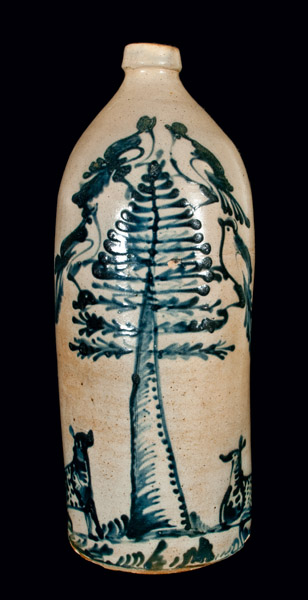 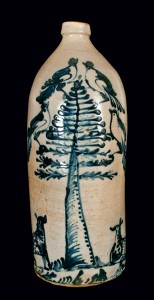 This monumental jug may have sat in the window of the Poughkeepsie Pottery to advertise its wares.

Grand in its size and decoration, a unique Poughkeepsie, NY stoneware jug will be offered without reserve in our March 5 auction of antique American stoneware and redware. Measuring 21 1/2″ tall, the jug was thrown on the potter’s wheel in two sections to accomodate its monumental size. A seam line near the shoulder reveals that the majority of the jug was thrown as a cylinder, and the remainder of the jug (including its rounded shoulder and squared spout) were affixed and sealed to the vessel. While the height of the jug is extremely rare, its slender form is perhaps equally unusual. The jug’s width is comparable to that of a two-gallon example, but with a height twice that.

The incredible size of the piece suggests it was made to catch one’s attention, and the decoration supports this notion. Extending upward and covering 18″ or so of the jug’s vertical surface is a large slip-trailed cobalt tree with graduated limbs. This tree was lightly incised into the surface of the jug prior to being applied in cobalt slip, a technique which allowed the decorator to map out his design. (Interestingly, the Fenton & Hancock stoneware cooler with decoration of a Civil War general and his wife, which set a record in our November 2006 auction, features similar incising under the decoration.) 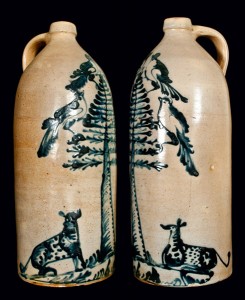 Perched near the peak of the tree are four fan-tailed birds with crests, and flanking the tree’s heavily-shaded trunk are a seated dog and a reclining doe with cobalt-spot-decorated bodies. The doe sports an unusually long tail, perhaps more fitting of a dog. Realistic sizing plays no role in the decoration, as the birds appear too large for the tree, and the dog towers over the deer. Other New York State and New England decorators were known to disregard the actual scale of design elements. For example, Norton stoneware from Bennington, Vermont is famous for such folksy discrepancies, featuring fanciful designs, such as an oversized flower basket beside a small deer or a large deer beside a much smaller tree. 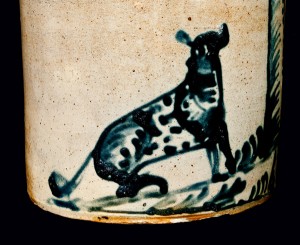 The animal scene on the Poughkeepsie jug captures four distinctive designs the pottery was known for: the fan-tailed bird, the dog, the deer, and a tree with graduated limbs. It is these distinctive designs, most notably the bird and the tree, that lead to a strong attribution to the pottery of Philip Riedinger and Adam Caire of Poughkeepsie, NY. A great deal of information is provided on this potting firm in William C. Ketchum’s seminal book, Potters and Potteries of New York State, 1650-1900. According to Ketchum’s research, the partnership of potters, Adam Caire and Philip Riedinger, began in 1857 at a long-standing pottery on Poughkeepsie’s Main Street. Prior to that time, Riedinger had been operating at the same location with another partner, Louis Lehman. Caire, the son of potter, John B. Caire, having finished his six-year apprenticeship in Hartford and Amboy, purchased Lehman’s interest in the operation. Thus, the partnership of Riedinger & Caire was born, a formidable business that would survive until Riedinger’s death in 1878. The operation was known as the Poughkeepsie Pottery, and during its later years, employed sixteen potters, including a prolific artisan named Samuel Brady (Ketchum, p. 118). Brady would operate a pottery in Ellenville, NY with partner, John J. Ryan, between 1881 and about 1897 (Ketchum, p. 143, 466). Numerous examples of Brady & Ryan stoneware from Ellenville show strong Poughkeepsie Pottery influences. Similarities are particularly evident in the partnership’s bird designs.Harmony movie 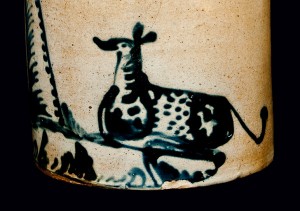 The eye-catching appeal of the jug suggests it may have sat in the storefront of the Poughkeepsie Pottery to advertise the company’s wares. Oral history of many other large-sized decorative pieces, including one or more coolers produced by J. & E. Norton of Bennington, a Decker jar from Tennessee, and an oversized Perine pitcher from Baltimore, indicate they sat in prominent locations to promote the potteries that made them. Quietly hidden away until recently in a New York State home, this great jug is sure to turn heads once again, just as it surely did over 125 years ago.watch full movie The Invisible Guest 2017 online