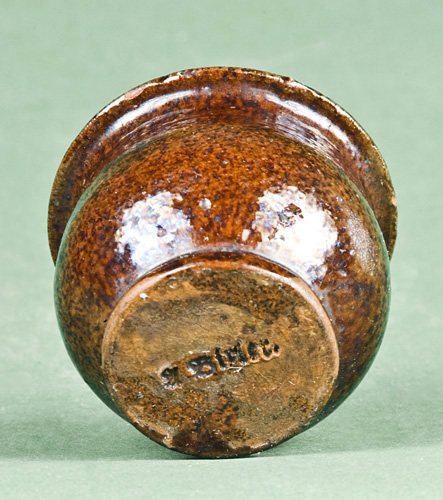 The case of the “Absalom Bixler” group of redware is a very interesting one. Redware pieces bearing his name, or clearly by the same maker as those that do, have long stood as landmark pieces within the canon of antique American utilitarian ceramics. Decorated with applied, bright yellow and green figures of birds and cats, or with quite elaborate sgraffito scenes depicting subjects with incredible folk art appeal, one hallmark of Bixler’s pottery is the use of large, blocky printer’s type to inscribe the ware. Several of these bold impressions read “ABSALOM BIXLER TO HIS WIFE SARAH” (or variations thereof), but no explicit maker’s mark or signature exists on any of the vessels.

As I discussed briefly in my Henry Rambo article, names inscribed on nineteenth century American pottery can be problematic. Even pieces stamped with apparent maker’s marks can be difficult to evaluate. For instance, someone unfamiliar with the history of Alexandria potters might see a jug marked “E.J. MILLER / ALEXA.” and assume that, as with many other pieces with similar marks made in that city, E.J. Miller was the maker of the item. But he was not—he was a merchant who had the Milburn family of potters make stoneware for him. Nevertheless, in the case of small stamps applied to a vessel in the manner of a maker’s mark, the situation is usually fairly straightforward—if the name isn’t the potter, it was probably some other businessman who would be reselling or otherwise distributing the vessel to consumers. Other times a pot is inscribed in an unusual manner, but the potter makes it very easy on us. For instance, the work of Henry Lowndes in Petersburg, Virginia, is signed in large slip-trailed cobalt script across the front of the ware, “H Lowndes / Manufactor / Petersburg / Va” or “H Lowndes / Maker / Petersburg / Va.” We can thank Mr. Lowndes for being so clear, but he was a rarity. Had he not added “Manufactor” to the front of his pieces, and we knew nothing about Virginia stoneware, we would have to turn to period documents to figure out who H. Lowndes was. In fact, we might assume that he was some obscure individual for whom a jar was made. Even so, our understanding of period American stoneware and redware—beyond the most simplistic of evaluations—always demands that we turn, in one way or another, to contemporaneous documentary sources. In the case of H. Lowndes, someone, at some point, opened a city directory or some other document and determined that the potter’s first name was “Henry” and not “Horace” or “Hezekiah.” But far beyond fleshing out first names, period documents are absolutely vital in properly evaluating the bulk of eighteenth and nineteenth century American ceramics—and no more so than in the case of mystery names like “Absalom Bixler.”

The best evaluation and discussion of the Bixler group that I have seen was written by Cynthia G. Falk and published in the July 2003 issue of The Magazine Antiques. Her article, “Sarah Bixler’s Plates and Flowerpots” is a comprehensive study of what are by far some of the finest pieces of Pennsylvania redware to have surfaced. One of my favorite pieces of redware, period, is the flowerpot decorated with an applied cat stalking a bird, inscribed in type, “READY FOR A CATCH” and “ABSALOM BIXLER FOR HIS WIFE SARAH,” in possession of the Henry Ford Museum in Dearborn, Michigan. Another piece I greatly admire is a redware plate with a sgraffito scene of a man holding a rifle with two Indians on horseback, inscribed in the trademark Bixler type around the rim in broken German, “DAUNAE.L BOON. DES FANKNESS INDAUNAS./1787” (something like, “Daniel Boone’s Capture by Indians”); this piece, like several others, is housed in the Winterthur Museum. For those unfamiliar with Bixler’s work, I highly recommend you read not only Falk’s article, but see also Jeannette Lasansky’s “Lancaster County, Pennsylvania, Pottery” in the September 1982 issue of The Magazine Antiques and The Pennsylvania German Collection by the Philadelphia Museum of Art and Beatrice B. Garvan.

Falk sums up the various attempts, over the decades, to assign a maker to the “Bixler” pieces as follows:

[S]cholars have disagreed on who exactly made the Bixler plates and flowerpots. Miriam E. Bixler, writing in the Journal of the Lancaster County Historical Society in 1977, asserted that Absalom Bixler was the potter. Without citing her sources, she stated that Absalom crafted pots, which he often signed “A. Bixler,” working in a little stone house on his property near Fivepointville in what is now East Earl Township, Lancaster County. She believed the building was originally the house of Absalom’s grandfather Abraham. According to Miriam Bixler, Absalom was a multitalented individual who worked as a farmer, woodcarver, maker of gunstocks, and justice of the peace, as well as a potter.

Later scholars, while continuing to cite to Miriam Bixler’s reference to Absalom as a jack-of-all-trades, have suggested another possible creator for the Bixler pottery. According to Jeannette Lasansky, Absalom Bixler was never taxed as anything other than a farmer, and his estate included no potter’s tools (although it did include printer’s type). Absalom’s brother, David, however, was taxed as a potter in Brecknock Township, Lancaster County, from 1841 to 1847, the year of their father, Abraham’s (1782-1847) death. The pottery was located on land previously owned by their father. Lasansky could not determine whether Absalom or David made the plates and flowerpots, since Absalom could have had access to the family pottery.

The case of Absalom Bixler, then, is a case where turning to period documents has unfortunately failed to give us the answers we seek. It also underscores the difficulty of researching artisans working in rural areas where city directories and even newspapers are rarely viable avenues for investigation—where (if, as in this case, the Census is no help) tax records, probate records (both of which Jeannette Lasansky attempted to use), land records, and other legal documents are our only hope of solving a mystery. Early researchers of American stoneware and redware have sometimes done the work for us, in one way or another, but often fail to cite their sources properly; in some cases we can reconstruct their work, in other cases we are forced to assess the credibility of their accounts and then make our own judgments.

Turning to the original text of Miriam Bixler’s article (“David Bixler, Folk Artist,” written mostly about Absalom’s brother, available in Vol. 81, No. 1 of the Journal of the LCHS), she writes,

Absolam [sic] (d. 1884), David’s brother, lived on the old homestead farm of his grandfather, Abraham Bixler, now occupied by Ammon Sauder, Denver R. D. #1. A deteriorating family graveyard is there. Absalom also was a Justice of the Peace as well as farmer, woodcarver, maker of gunstocks during the Civil War and potterer.

He often signed his pottery “A. Bixler” and worked in a little stone house on the property thought to be the original house. At a public sale of his goods over one hundred eighty planes were sold. A flowerpot inscribed “Abs Bixler to his wife Sarah, 1834 [sic]” is in the Titus C. Geesey Collection of the Philadelphia Museum of Art.

Ms. Bixler does not cite her sources properly, but does include a list of source material at the end of her article. While her information about Bixler’s pottery may be apocryphal, the details do not seem to be merely “imagined” by a creative historian or otherwise made-up. Ms. Bixler interviewed antiques dealers, curators, a librarian at Franklin & Marshall, and, most importantly, two locals who would have been familiar with at least a rough account of Absalom Bixler’s life and work. One of her interviews dates back to 1963, when people whose parents had had direct contact with Bixler himself were still alive to tell their stories.

One of the most interesting parts of Miriam Bixler’s account is her statement that Bixler “often signed his pottery ‘A. Bixler.'” This does not seem like a fact pulled out of thin air, and, if the author is referring to a stamped maker’s mark, is consistent with the types of signatures found on plenty of other redware made up and down the east coast and westward. It would seem that if we could find a piece stamped “A. Bixler,” we would be able to put the matter to rest and say with confidence that Absalom Bixler was a potter and that he, beyond a reasonable doubt, made the group previously doubtfully attributable to him. A piece that we discovered in the Kelly Young collection can help us immensely in this regard.

A miniature redware jar, covered in a lead and manganese glaze and measuring only 1 ¾” tall, is impressed on the bottom with one of the most important marks we have ever seen on a piece of American redware: “A. Bixler.” The typeface used to produce the mark is one I have never encountered on redware or stoneware. The style, a kind usually associated with Germany, prompted me to look into what sort of typeface this was. The University of Texas at Austin’s College of Fine Arts has an amazing collection of period typefaces, The Rob Roy Kelly Wood Type Collection. According to the University the collection “is comprised of nearly 150 faces of various sizes and styles, including examples of the most popular printing types in use between 1828 and 1900 … .” Kelly, a “noted design educator, collector, and historian,” used his collection in the early 90’s to assist the Adobe software company in resurrecting period typefaces in digital form. One of the types featured in Kelly’s collection is particularly appropriate for our evaluation of the “A. Bixler” jar. Blackletter script and, more specifically, the blackletter typeface called “German,” are strikingly similar to the type used to produce Bixler’s mark. Click here to have a look. Note in particular the strange lowercase “x,” also seen on the bottom of the pot.

According to Falk, printer’s type was sold in Absalom Bixler’s estate. While listed as a farmer in all Federal Census population schedules between 1850 and 1880, it seems that Miriam Bixler’s assessment of Absalom as a veritable one-man band of nineteenth century Pennsylvania handicrafts is correct. In their 2005 book, Flying Leaves and One-Sheets : Pennsylvania German Broadsides, Fraktur, and their Printers, Russell and Corinne Earnest note the existence of a book plate depicting a man surrounded by angels, Adam & Eve, and a sun face, inscribed, “This BOOK is the property belonging to ABM BIXLER ESQR,” probably printed, according to the authors, by Absalom Bixler in Lancaster County. (Bixler is referred to as “Absalom B. Bixler Esq.” in the 1860 Census.) Bixler’s work as a printer would explain the large, interesting type used to inscribe his redware in general, and would also explain the unusual (and apparently unique) blackletter script used to sign his miniature redware jar.

We are unaware of any other examples of American redware impressed with Absalom Bixler’s maker’s mark. It is hard to overstate the importance of this pot, which conclusively establishes Bixler as a potter and, by extension, the origin of the mystery group of Bixler redware. It also stands as an artifact of a man who clearly lived a life of artisanship and self-reliance, in this case combining his skills as both a potter and a printer to produce one object whose size does not belie its great significance.