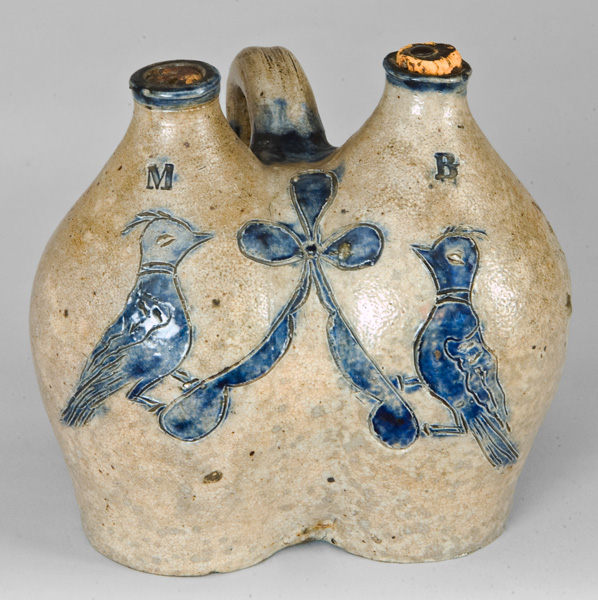 The pottery form known as a gemel, also gemel jug or gemel bottle, is one of the rarest forms in American stoneware. The word is derived from the Latin word “geminus,” meaning twin, double, paired, or half-and-half. The plural of this same word, “gemini,” is used to refer to the constellation composed of  twin brothers, Castor and Pollux, of Greek mythology. The words “twin” or “double” definitely come to mind when one thinks of a pottery gemel, which is composed of two wheel-thrown jugs, joined together with clay between the two. A single handle is applied to carry and pour the paired jugs, though the positioning of this handle can vary from potter to potter. Variations of the form were also produced by American glass makers. Occasionally, the form is taken one step further, involving four connected jugs. Such pieces are referred to as “double gemels.” 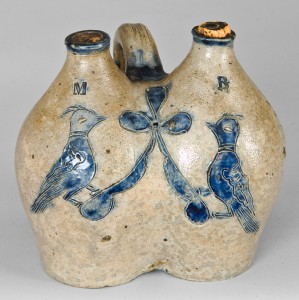 Stoneware Gemel with Incised Bird Decoration to be sold in our October 31 auction. Height 6 1/4".

The purpose of a gemel was to hold two liquids that were frequently used together in individual chambers. The form obviously made using such liquids more convenient than carrying two separate jugs. It is believed that many gemels were designed to hold oil and vinegar, which were commonly used in foods together, but needed to be kept separate. In other instances, a gemel may have held two different types of liquor.download movie iBoy 2017 now

While many gemels exist bearing little or no decoration, some are known with wonderful brushed or incised designs, indicating they were likely made as specially-ordered or presentation items. Most signed or attributed stoneware examples were produced in New Haven, CT, by Absolom Stedman, or during Stedman’s partnership with one of the Seymours, around the year 1831 (Ketchum, American Stoneware, p. 58). Several are known bearing maker’s marks from this pottery, including some with distinctive incised bird designs accented with impressed circles.

Redware examples are also known from elsewhere in the country, including a few produced in the Shenandoah Valley of Virginia, which are pictured in H.E. Comstock’s The Pottery of the Shenandoah Valley Region. A small example by the highly-regarded potter, Anthony Bacher, who worked in Adams County, PA, Winchester, VA, and Thurmont, MD, circa 1850 to 1885, is glazed in cream and brown and features a horizontal handle. A gemel by Winchester and Strasburg, VA potter, Solomon Bell, consists of two molded male figures holding mugs. Clay hats serve as the containers’ lids. Gemels were no doubt produced in nearly every region of 19th century American utilitarian pottery production, though few have survived.

We have been consigned an exceptional stoneware example for our October 31 auction, which was given as a gift to an early Hanover, PA antiques dealer in the first half of the 20th century, and has never been offered for public sale. Measuring 6 1/4″ tall, the double jug is decorated with two incised birds filled with bright cobalt slip. Both birds are embellished with incised crests and ringed necks, and their wings are outlined in unusual incised wavy lines. Each are perched on a scallop-edged leaf or stem, connecting at the center with a three-petaled flower resembling a bow. In this way, the connected design mimics the conjoined structure of the jugs.

The cobalt-highlighted letters M and B are impressed below the spout. According to the consignor, this piece originally descended in a New York State family by the name of Brewster. The two letters, therefore, may be the initials of its original owner, with the “B” referring to Brewster. However, it seems more likely that the letters refer to the contents of each jug. The best hypothesis on the meaning of these letters is that they refer to madeira and brandy. Madeira, a wine produced since the 16th century on the Portuguese island of Madeira, gained much popularity in 18th century America. It was favored by many of the founding fathers, including George Washington, Thomas Jefferson, and Benjamin Franklin, and was used to toast the signing of the Declaration of Independence. Madeira’s flavors and uses varied, largely depending upon the aging process and varieties of grapes used. Interestingly,  the wine’s long travels on ships exposed to the sun’s heat created a taste many found pleasing, and this accidental method of aging was later replicated on the island’s sun-drenched beaches. Brandy, whose name is derived from the Dutch word “brandewijn,” meaning “burnt wine,” was originally created from wine distilled in oak casks prior to shipment. The distillation was designed as a method of preservation and to reduce costs by concentrating the liquid; the product was diluted with water upon reaching its destination by ship. Consumers soon realized, however, that the undiluted wine had a robust and pleasing flavor, which was chemically altered by the distillation process,  and soon began drinking it without adding water. Most of us are aware of 18th and 19th century stoneware jugs and coolers bearing the impressed or incised inscription “BRANDY,” indicating its popularity in early America.

An interesting link can be found between madeira and brandy. Both have been frequently used together in cooking as a base for meat glazes, sauces, and marinades. I have also found a 19th century recipe for a cake made with both madeira and brandy. It is possible that this gemel saw more use as a kitchen accessory than as someone’s personal flask.

As far as its maker is concerned, the fat-bodied birds that adorn the front most closely resemble the work of the Crolius and Remmey family of Manhattan, NY. The  style of decoration on this example is so far unlike the bird designs of the potters of New Haven, CT, who produced most incised gemels known, that we can safely rule them out. Furthermore, the age does not strike me as early 1830’s, but much earlier, perhaps sometime around 1800. The motif of two facing birds may be an early predecessor to later paired bird designs used in Baltimore and Philadelphia by Henry Remmey, Henry Harrison Remmey, and Richard Remmey.

From the very beginning, we have always endeavored to add excitement to the collecting community and offer fresh-to-the-market examples of exceptional quality. 2009 has been a year that has fulfilled this hope of ours. This gemel follows in the wake of two other remarkable incised stoneware pieces we have offered this year, the first being an Albany, New York, cooler with fish and bird decoration, which set a stoneware specialty auction record at $103,500, and the second a Connecticut flask with bird and flowering urn decoration, which sold on July 11 for $40,250. Like these two other pieces, I believe this newly-surfaced gem will further support the claim that ceramics are the hottest commodity in American decorative arts today.