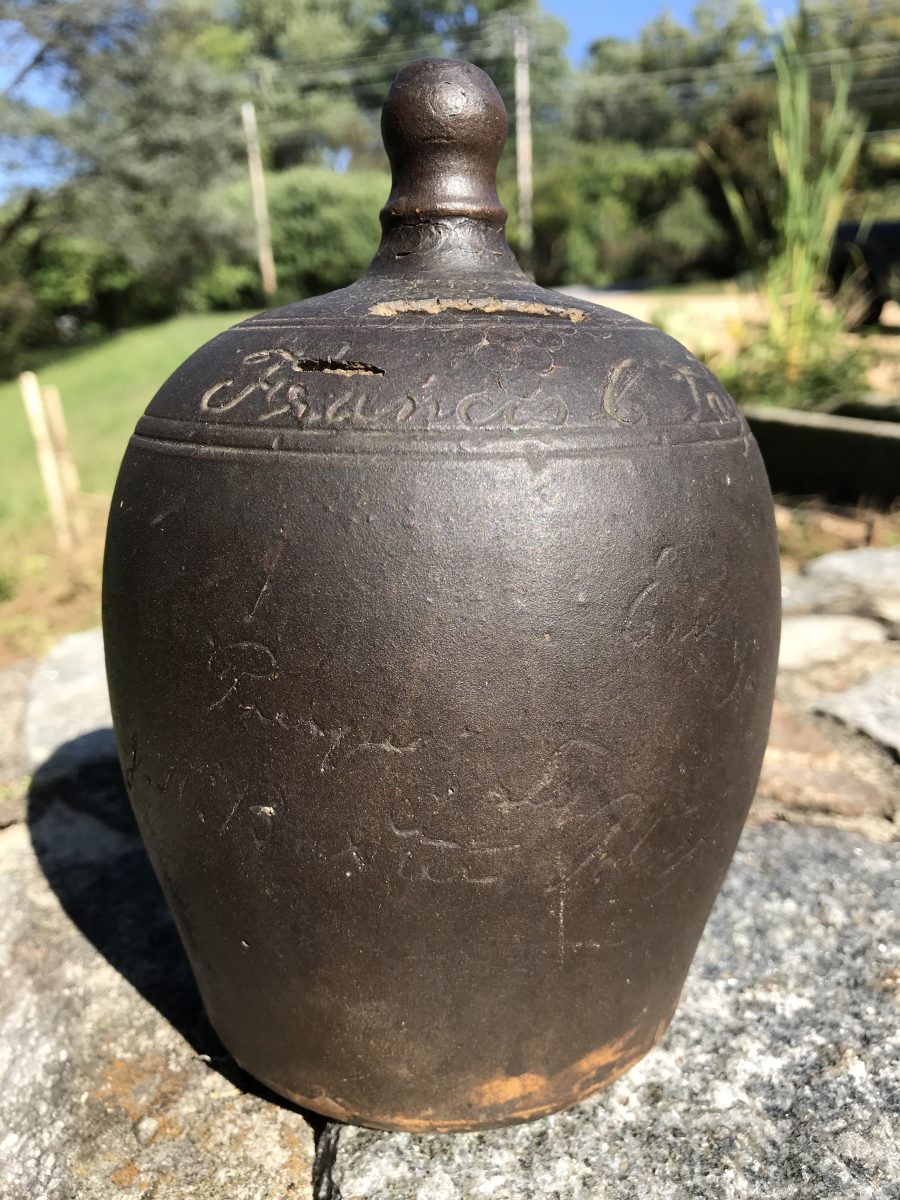 We recently received a rare example of northwestern Pennsylvania stoneware for our upcoming October 26 auction: a bank made at the Erie stoneware shop of George Webb and probably Jay Childs. Webb and Childs’ shop was the descendant of Erie’s first stoneware pottery, which was founded in 1851 by Reuben and Charles Sibley on the Erie Extension Canal, between Second and Third Streets. The Sibleys had come from the stoneware production hotbed of Bennington, Vermont, but for some reason they quickly abandoned their new Erie venture, with stoneware potter George Webb taking it over in 1853. Webb went through various partners at this site, finally taking in a former ship’s captain, Jay Childs, in 1865. As Phil Schaltenbrand notes in his sweeping book on Pennsylvania stoneware, Big Ware Turners, “[A]las [Webb & Childs’] undertaking lasted only two years, and very little is known about it. Stamped pieces from WEBB & CHILDS are still waiting to be identified.” (Also see Schaltenbrand for a great explication of the Erie stoneware potters.)

To help us understand exactly when this bank was probably made, we must turn to its inscription: “Francis C. Taylor / Erie, Pa / Presque Isle Pottery / J. N. Baxter.” Presque Isle Pottery was a trade name used by the partnership of Webb & Childs; indeed, the only reference we have been able to find to this name is an ad for their stoneware shop (reprinted in Schaltenbrand) with the headline, “PRESQUE ISLE POTTERY, ON THE CANAL, BETWEEN SECOND & THIRD STS., ERIE, PENNA.” This ad goes on to announced that the pair “have associated themselves, under the firm and style of Webb & Childs, in the Pottery business, at the old stand … .”

George Webb’s Presque Isle Pottery closed in 1867; in 1861 he had acquired a competitor nearby who would operate for many years, but who does not appear to have ever used “Presque Isle Pottery” as a trade name. This would place the bank’s manufacture probably in the 1865-67 window, but perhaps as early as the 1850’s, if (despite what we find in the historical record) “Presque Isle Pottery” was a name used earlier by Webb.

But turning to the names on the bank, Francis C. Taylor (a girl) was born in Erie on December 19, 1861, so the bank could not pre-date this date. J.N. Baxter appears to be Julius N. Baxter, the uncle of little Francis, she being the daughter of his sister, Charlotte. Baxter was born circa 1849 in New York, and is listed in the 1850 census living in Utica with his father, Sylvester (a fireman), mother, Jane, and some siblings. By 1860, his father had apparently died and his mother was raising the family in Kalamazoo, Michigan. It is unclear when Baxter moved to Erie, but he seems to have done so by 1870, as he married his young wife, Jennie (born around the mid 1850’s), about that year. But given the latter date of 1867 for the bank, it would seem he was at least visiting the area by that time.

You can see, though, that given that J.N. Baxter was only about 16 years of age when Webb & Childs struck up their partnership, it seems highly likely that it was indeed their Presque Isle Pottery that produced the bank.

I find inscribed stoneware objects like this perhaps the most fun to research, as they often allow us to add surprising new pieces to the American stoneware puzzle. In this case, while (as far as we know) “Stamped pieces from WEBB & CHILDS are still waiting to be identified,” we can at least say with relative certainty that this incised bank was produced under their tenure near Lake Erie. 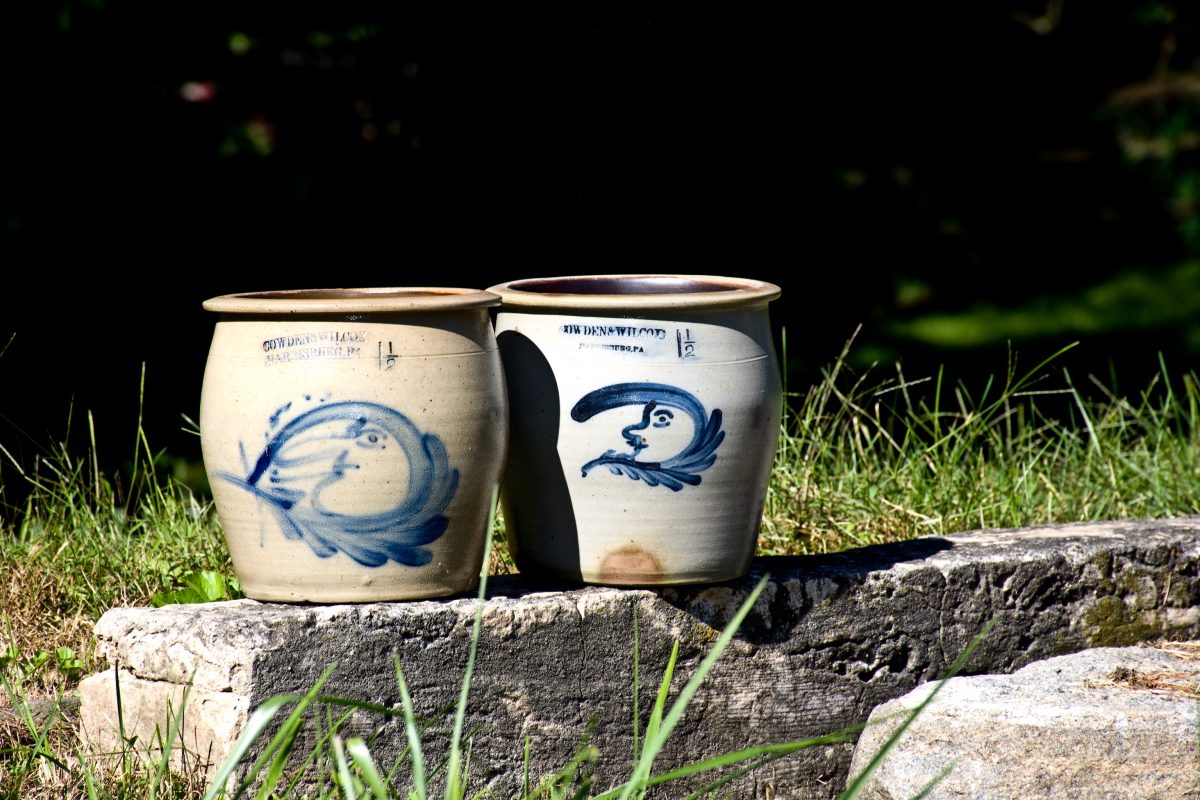 Our October 26, 2019 auction will feature two really rare versions of the sought-after Cowden & Wilcox (Harrisburg, PA) man-in-the-moon design: Both, remarkably, on one-and-a-half-gallon jars, one of these features a man-in-the-moon smoking a pipe, the other, a mustached version.

Just a quick video of us unboxing one of the many packages that are constantly arriving at the gallery.

There were three key stoneware potteries operating in Huntingdon County, PA about the middle of the nineteenth century; and while the work of none of these is commonly found, two of them left behind significant bodies of either attributable or signed ware.

One of these is the beloved and fairly well-known Huntingdon shop of Henry Glazier, which operated from about 1830-1854 and (according to Schaltenbrand’s excellent book, Big Ware Turners), may have been the earliest central Pennsylvania stoneware pottery.

A second pottery produced ware that, when marked, is at least as equally rare as Glazier’s–that of the Hissong family, who made stoneware in Cassville from 1847-1912. In 2009, we were very happy to handle what is by far one of the best signed examples of Hissong stoneware: a pitcher marked “E.B. HISSONG / CASSVILL” and made for a local tavern keeper. (If we want to veer a little beyond the middle of the century, we could include the Shirleysburg shop of Philip Kabis, who worked circa 1864-88 and for whom marked ware is very rare.)

But there is another Cassville pottery that operated for a long time (1842-1913!), but for whom no signed work is known–that of Jacob Greenland and his family. Greenland is notable not only as a long-term Huntingdon County stoneware producer, but as a member of a well-known family of potters operating in southwestern PA and Morgantown, West Virginia. As my brother, Mark, put it on our Featured Photos Page for our 10/26/2019 auction:

Indeed, the Morgantown-Uniontown stoneware school of the Thompsons and Greenlands churned out the beloved “People Crocks” that are amongst the most sought-after from the region.

And so it is remarkable that a great Huntingdon County, PA churn was just consigned to our October 2019 auction, bearing a distinctive local floral design, the inscribed name of a Cassville merchant (with accompanying 1855 date), and the figure of a woman in the very manner of Jacob Greenland’s family in Uniontown and Morgantown. What cinches this example up as a confirmed Jacob Greenland product is the fact that the aforementioned merchant, Richardson Read, appears on the very same 1850 federal census page as Greenland, making him a close neighbor of the potter. Thus for the first time we have a great sense of the type of pottery Jacob Greenland was making alongside his fellow Huntingdon County stoneware manufacturers, and it is just the sort of stoneware we would expect him to make, in terms of decoration. This churn will allow us to attribute future examples to a prolific pottery, and it is always exciting to be able to fill in gaps like this, as we try to flesh out a more complete history of the American stoneware industry!