Mark takes us through the gallery to show off and discuss many of the lots being offered in our Spring 2020 Auction of American Stoneware & Redware. A remote-only Internet / Phone / Absentee Auction running from April 6 to May 1, you can bid now via our website!

Happy New Year! We’ve returned after the extended fall auction mop-up and holiday break, excited to turn toward our first auction of 2020. Our upcoming March 21 auction–for which we are now accepting consignments–also marks our first of a new decade, and I felt this was an opportune time to reflect on what the 2010’s brought us as a company, and gave the American stoneware collecting as a whole.

As we entered the year 2010, the World Auction Record for American stoneware stood at $148,500, for a heart-shaped inkwell made in 1773 by William Crolius in lower Manhattan that sold at Sotheby’s in 1991. (This wonderful example is now a key part of the American stoneware collection of the Metropolitan Museum of Art, thanks to a generous gift by prominent collector, David Bronstein.) Our auctions, which we began holding in 2004, had been consistently breaking records for various categories of American stoneware, but our highest price realized as of January 2010 stood at $103,500 for an elaborate water cooler made by the Boyntons in Albany, NY in 1817. (This remains, to this day, the World Auction Record for a piece of Albany stoneware.) At that time, exceedingly few pieces of American stoneware had ever sold for six figures, and this represented the highest price ever paid at a stoneware specialty auction.

We sold that cooler in March 2009 at our then-auction home at the York Expo Center in York, Pennsylvania (commonly called the “York Fairgrounds”). That site had become a well-known antiques mecca, beginning (I believe) with the establishment of what is now called the Original York Antiques Show in 1934. This show was famously taken over by Paul Ettline in 1956 and eventually Melvin Arion in 1996, who continues to operate it today. Various other antiques and collectibles expos have been held in York over the decades and our close proximity to this location made it a great fit for us. (Baltimore County borders York County on its south.) At the York Expo Center we also sold the now well-known Fenton & Hancock (St. Johnsbury, VT) water cooler that brought $88,000; the $71,500 M. & T. Miller (Newport, PA) birdhouse; an incised Baltimore bird pitcher by the Remmeys that brought $69,000; and a Western PA canning jar bearing the profile of a baseball player that realized $65,550. (A couple of these remain World Auction Records for their places of origin.)

I would say, though, that things really changed dramatically for our company (and by extension the American stoneware market) over the past decade, in 2010 and beyond. One huge step in the development of Crocker Farm was our acquisition in the summer of 2010 of the 1841 Gorsuch Barn, a place that has become the auction home of American stoneware and redware–an ideal location for us, and one we feel blessed to have. I grew up visiting “the Barn.” It was an antiques shop called Glencoe Gardens and had been a local institution for decades; with the death of its owner, Emma Carroll, in 2009, we were able to acquire it, restore much of its former nineteenth century glory, and transform it into the space you know today.

We held our first auction at our new gallery in the fall of 2010, and in March 2011, we realized a new highest price at $138,000 for the heavily-incised memorial jug for drowned potter, Benjamin Herrington. This was a big milestone for us, but as the decade progressed, we would come to surpass that mark many times over, beginning in the summer of 2013. That July’s auction saw two prices in the neighborhood of $200,000 each: $230,000 for one of the finest examples of Baltimore stoneware in existence, and $195,500 for an extremely fine New York City jar bearing an incised federal eagle and 1802 date. (The Manhattan jar still holds the World Auction Record as the highest price ever paid for a piece of stoneware from this all-important production center.)

The catalog for the following summer’s auction was already at the printer when we were contacted to sell one of the greatest examples of American stoneware ever to hit the auction block: an upstate New York churn bearing the wonderful design of four marching soldiers. Only in our hands for a few weeks leading up to the auction and inserted into the sale as an addendum lot, it realized $402,500, eclipsing our previous highest price by almost two-fold. This was followed up in the fall of 2015 by our sale of the now-iconic early Baltimore water cooler with heavily-incised federal eagle design that realized $483,000, still the World Auction Record for American stoneware.

Besides the extreme growth of the American stoneware market as seen at our auctions, we were very gratified over the past ten years to see our auction develop into a very well-rounded institution that takes pride in bringing the best objects to market from essentially all areas of American stoneware collecting. Our sales have always been known, since the outset, for offering a very diverse selection of American stoneware and redware. But I would say over the past decade, the diversity of our auctions has been realized in new ways. Perhaps no greater example of this is the number of wonderful Southern face vessels and other important Southern ceramics we have been privileged to handle during this time period. The Edgefield face jug we sold in the summer of 2017 for $100,300 remains the World Auction Record for one of America’s most beloved ceramic forms, the Southern face jug, and that sale is only one key highlight in a long string of great Southern material for which we have become known.

Piggybacking off of this, it has been gratifying for us to see Baltimore begin to receive more recognition as an extremely important Southern production center for American stoneware. This new understanding of Baltimore’s role in the development of the Southern stoneware craft and American stoneware craft as a whole is due to our very own Luke Zipp’s heavy research on the subject since around the year 2000. From the outset, our sales have been known for their attention to detail and extreme focus on accuracy and incisive, original research. And indeed it has been our key new discoveries and publication of original research in our auction catalogs and elsewhere that we are perhaps most proud of. The establishment of Baltimore’s Remmey and Parr families as essential ones in the history of American stoneware production; the discovery and establishment of Thomas Commeraw as a key early African-American businessman; even smaller, less-sweeping new discoveries that have filled in important gaps and enriched our understanding of the handicraft we love–all of these that happened or truly took hold over the past decade are achievements that have transcended the antiques market and broadened American decorative arts scholarship as a whole.

With the 2010’s behind us and the 2020’s now marching forward, we are excited about more new discoveries, fun auctions, and comradery with our fellow ceramics friends this year and beyond! Again, Happy New Year and from all of us at Crocker Farm, you have our sincerest gratitude for your interest in our auctions and your patronage over the decades.

With more to come, we’ve added some videos today of stoneware featured in our October 26, 2019 auction. Here are a few, but feel free to click here to see all of the videos in this batch! 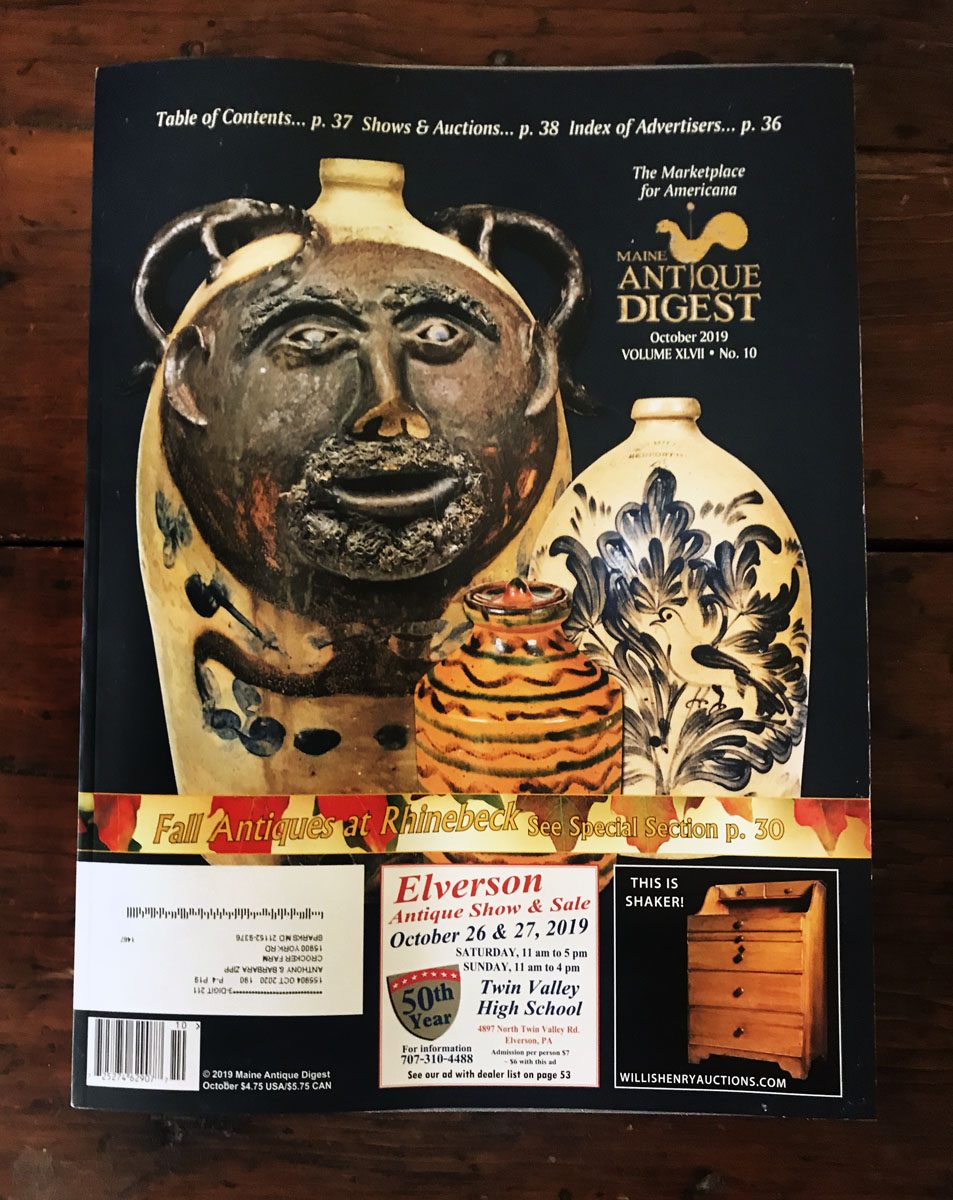 We were honored to have our July 2019 auction featured on the cover of Maine Antique Digest this month.

Additionally, Antiques and the Arts Weekly (the Newtown Bee) included a very nice extensive article about the sale in one of last month’s issues:

Thanks, as always, to both of these wonderful publications for covering us.