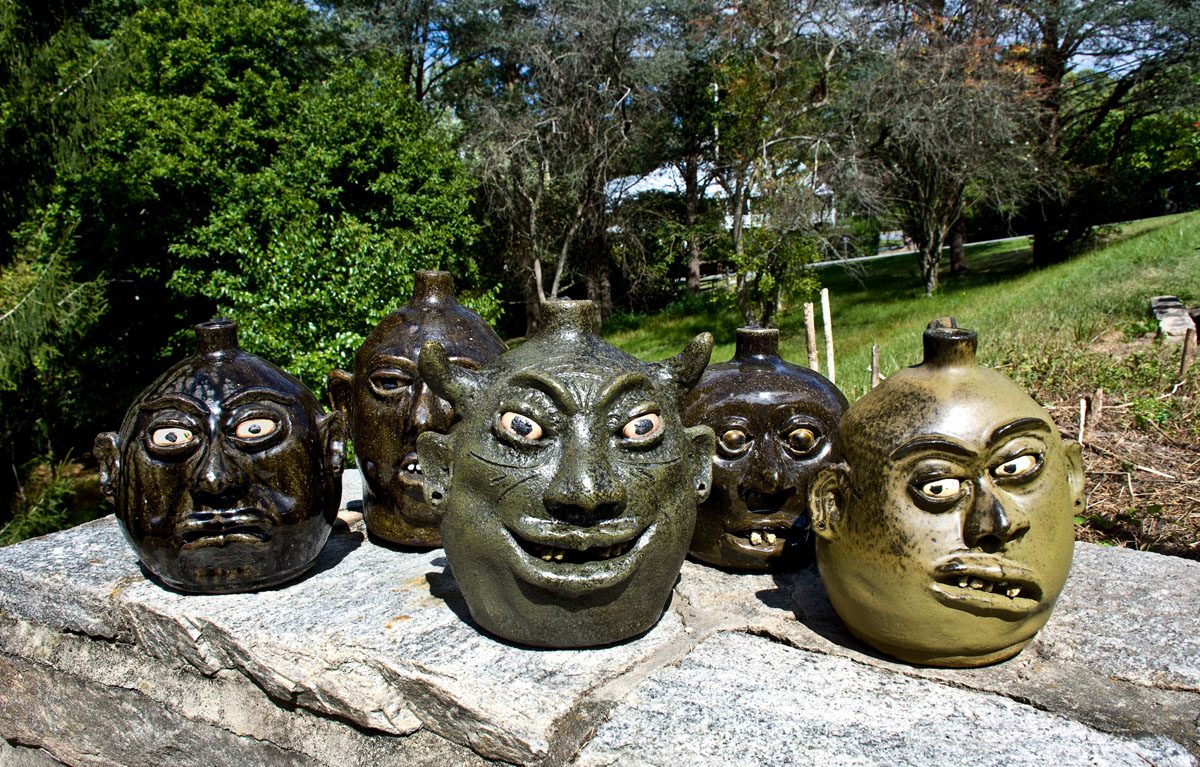 An excellent selection of Lanier Meaders face jugs from our upcoming October 26, 2019 auction, including an extremely fine and rare devil jug (center). 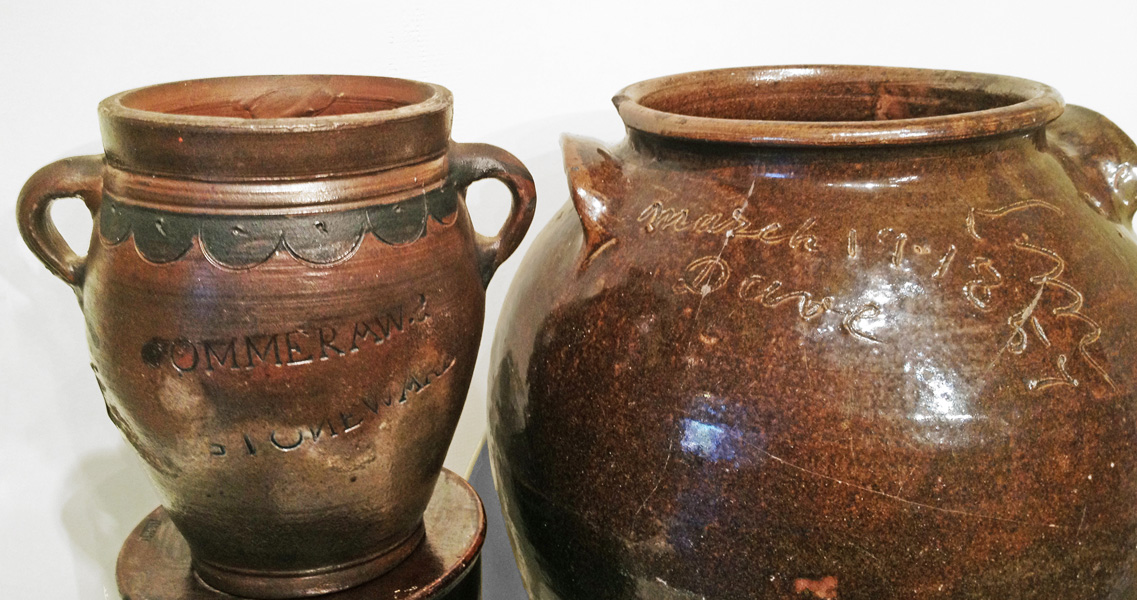 Two exciting redware (or earthenware) animal bottles will cross the block in our January 30th auction of the William Kelly Young Collection. Both were purchased by Mr. Young in 1993 at Christie’s in New York City, in a sale that included several other fine examples of American redware and some stoneware. Both of these bottles were produced in Salem, North Carolina, sometime during the early part of the 19th century, by German-born potter, Rudolph Christ (1755-1833). Christ took control of the shop of deceased potter, Gottfried Aust, in Salem in 1789 and continued to work there until 1821 (Bivins, p. 30). He is most well-known for producing a variety of wonderful molded animal forms (along with a line of wheel-thrown vessels), including squirrels, owls, turkeys, crayfish, chickens, bear, sheep, foxes, and several sizes of fish.

The first redware bottle of the two to be sold, in the form of a standing squirrel holding a nut, is decorated with daubs of manganese and copper over a yellow slip and covered in a clear lead glaze. The reddish-orange color of the underlying clay is visible on the underside of the bottle’s recessed foot. Interestingly, manganese is brushed in a figure 8 pattern on one leg. Whether this treatment was implied to mean the number 8 or whether it was merely the haphazard brushwork of the potter, we will never know. The glaze is remarkably similar to the “multi-glaze” or “polychrome glaze” used by the Bells and Eberlys of Strasburg, Virginia, several decades later. In fact, I have seen a few Moravian pieces misattributed to the Shenandoah Valley for this reason. In actuality, this glaze was meant to mimic a glaze popularized by the English potter, Thomas Whieldon, during the mid 1700’s (Bivins, p. 209). The second Moravian bottle is more stylized, in the form of a portly bear. The figure’s small mouth reveals a few tiny sharp teeth, and its right foot rests upon a slain animal, possibly a sheep or pig. Its surface is covered in a dark brown glaze composed of lead and manganese.

Until recently, the most exhaustive study of North Carolina’s Moravian redware was John Bivins, Jr.’s book, The Moravian Potters in North Carolina, which was written in 1972. This book is an excellent source of information, and I encourage anyone interested in this fascinating school of pottery to take a

look at it. However, new information has come to light since then, particularly in the last three years. At the time the book was printed, for example, the author’s knowledge of some of Christ’s rarest forms could only be gleaned from period inventory lists and the existence of the objects’ original molds. Regarding an owl form, Bivins notes “since no finished examples are available, we do not know for what use the owls were intended (Bivins, p. 204).” The same is mentioned regarding a fox mold. However, both finished forms have surfaced since that time, adding to our knowledge of this potter’s work.

The 2009 edition of Ceramics in America, published by the Chipstone Foundation, is dedicated entirely to the Moravian potters of North Carolina, offering a current look at their work with several new discoveries.  Edited by Robert Hunter and Luke Beckerdite, the book includes the following articles:

Staffordshire in America: The Wares of John Bartlam at
Cain Hoy, 1765–1770

The front cover of this edition pictures an incredible copper-glazed figure of a fox clutching a chicken (which in my opinion is one of the finest examples of early American pottery I’ve seen in some time). Looking at this piece, it is easy to understand why there is such great interest in Moravian pottery among historians and folk art collectors alike. I recommend anyone interested in the charming and useful objects created by Christ and others from this tradition to take a look at Ceramics in America‘s latest installment, a great contribution to our knowledge of Southern decorative arts.