A newly-surfaced Thomas Downing oyster jar holds the distinction of being the first we have seen that was clearly made by Clarkson Crolius. Few stoneware jars made for America’s most famous oysterman of his day, the African-American entrepreneur Thomas Downing, are known. But every other example we have seen can be firmly attributed to a stoneware shop that relatively few American stoneware collectors have paid significant attention to: that of Dennis McClees and later T.G. Boone in Brooklyn. This Brooklyn stoneware manufactory, located at the corner of Sands and Navy Streets, was founded in or about 1839, and the distinctive typeface used to compose its various maker’s marks is a match for that found on all previous Downing examples we’ve seen. (For more on this shop, see William Ketchum’s Potters and Potteries of New York State … and Mark Smith’s great article in the Jan-Feb 2007 issue of Bottles and Extras.)

The appearance, then, of the following jar is significant:

It does not bear the aforementioned, cruder typeface used at the Brooklyn manufactory. Rather, it features a refined style only seen locally on the signed work of Clarkson Crolius, who happened to be not only New York’s most prominent stoneware maker but the most famous American stoneware potter of his day. Crolius employed a progression of numerous maker’s marks over his roughly forty-year career, and of these we particularly see an extreme similarity between this newly-discovered Downing stamp and Crolius’s oval-shaped “STONE-WARE MANUFACTURER” mark. This maker’s mark appears on some of Crolius’s more typical stoneware vessel forms, but it notably tends to appear specifically on his well-known preserve jars–stamped with the fruit names “PEACHES,” “PEARS,” “QUINCES” and “PLUMBS.” How fitting, then, that the jar at hand, made to preserve Downing’s pickled oysters, should perhaps date to the same time period.

And indeed this brings us to the other notable similarity between this new Downing jar and the work of Crolius: its distinctive, chocolately Albany glaze. Brown Albany slip, used extensively on American stoneware beginning in the first decade of the nineteenth century, was made using clay found in a specific mine in Albany, New York. You would think this would mean that Albany glaze would have a consistent appearance across all stoneware potters, but this is not the case. And indeed the overall appearance of the Albany glaze on this Downing jar matches very well that seen on Crolius’s work; see, for instance, the marked similarity between this oyster jar and a Crolius “PEACHES” jar:

While the Brooklyn-attributed jars should date to something like an 1839-1846 window based on the lifespan of that shop, theoretically for Crolius’s we could place a date as early as 1825–the first year Downing appears in the local city directory as an “oysterer” at No. 5 Broad Street. And while I think that’s probably about as reasonably early as we could go with these jars, we should also keep in mind that based on period advertisements, Downing definitely seems to have been running an oyster stand out of No. 5 Broad even prior to 1825, when oystering was not his primary occupation:

As someone who personally takes an inordinate interest in New York City stoneware, African-American ceramics and the history of the African-American community in New York City, this jar stands out to me as one of the truly remarkable artifacts we have had the privilege of handling. Indeed, even from a pure stoneware perspective, signed or attributed Crolius oyster jars are extremely rare in their own right! If you aren’t familiar with Thomas Downing and his remarkable life, please see, for instance, this great article from The Virginia-Pilot. To see the last Downing jar we handled, which set a world auction record for an American stoneware oyster jar, visit our Summer 2020 online catalog. 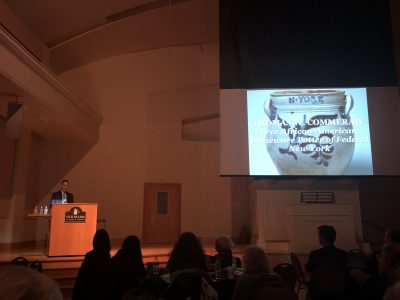 I just wanted to quickly thank the American Ceramic Circle and Old Salem / Museum of Early Southern Decorative Arts for having me over the weekend. It was my privilege to present my latest talk on Thomas W. Commeraw, the free African-American potter of federal era New York City. All of the folks at both organizations made this one of the best ceramics-related events I have ever attended.