We recently shot several more stoneware-related videos, and here are four of Mark discussing some rare examples. This is something we now plan to make a regular part of our website, and are really enjoying being able to add this kind of content to the internet. With that in mind, we have added a new page to CrockerFarm.com, where all of our videos are available the instant they are added to YouTube: www.crockerfarm.com/videos/

Thank you for your positive feedback about this latest addition to our website!

Mark discusses “People” crocks of West Virginia and Southwestern PA in general, but specifically the two examples we will be selling on March 3, 2012.

We shot and uploaded several new stoneware-related videos this week. We really enjoy talking about American stoneware and redware, and hope this is another good way to share that with you.

Luke discusses David Parr, one of the most influential American stoneware potters, and one Luke has spent a ton of time researching. Not ten years ago, Parr’s work was routinely attributed to some anonymous Pennsylvania potter, and anyone walking through an antiques show, shop, etc. would see tags hanging from his pots with no attribution to the man who made them. Today, these same pieces are, with frequency, accurately attributed as Baltimore pottery, and it was solely Luke’s careful work that has enabled that to happen. Here he discusses two significant Parr examples we will be selling on March 3, including the only known signed example of Parr’s work.

Brandt talks about the Philadelphia stoneware Liberty Bell mug, and the basically unknown potter who made it. Brandt’s in-depth article on the subject will be posted soon.

Luke talks about the ornate Remmey bird bank (includes an interesting, detailed period drawing of the Philadelphia Remmey shop in 1877.)

Brandt talks about North Carolina redware potter Henry Watkins and his signed and dated jar. For more on Watkins, see Turners and Burners by Charles Zug. 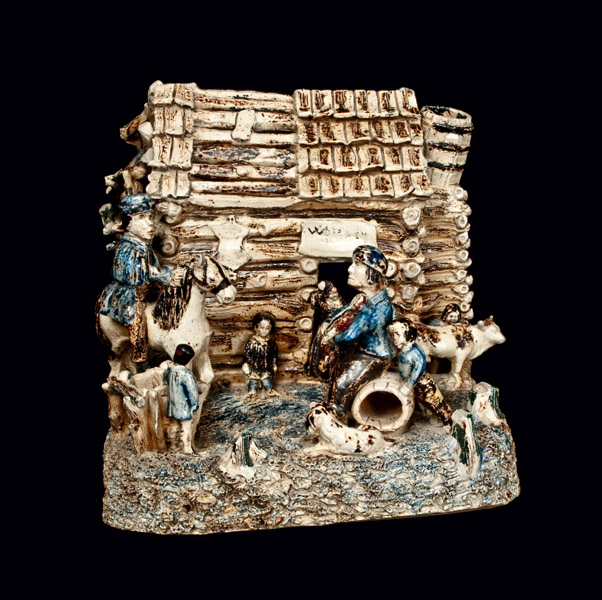 We just wanted to share some important new information about Lot 23 in Saturday’s auction, the stoneware log cabin scene attributed to Anna Pottery. An expert on this subject emailed us yesterday to draw our attention to “The Arkansas Traveler,” an important painting and song uponwhich Lot 23 was based.

“The Arkansas Traveler” was painted by Arkansas artist Edward Payson Washbourne, who completed it circa 1856. It was rendered from a popular fiddle song written by Colonel Sandford C. Faulkner, probably based on an actual conversation he had with a country settler in 1840–and it plays off of an encounter between the sophisticated “Traveler” and the country “Squatter.” Popular prints were created from Washbourne’s original, including a version by Currier & Ives in 1870. The man on horseback, whom we had speculated may be a Union soldier, is Colonel Faulkner, who served in the Confederate army, including in command of the Little Rock Arsenal.

“The Arkansas Traveler” became a ubiquitous pop culture image, particularly in reference to the State of Arkansas, where it became the state song from 1949 to 1963; it is now the state historical song. The song has been used in numerous cartoons and an Academy Award-winning Laurel & Hardy film. The Arkansas Travelers play Double-A baseball in Little Rock.

A version of Washbourne’s painting appeared at the 1876 Centennial Exposition in Philadelphia, and the kind person who emailed us speculates that the stoneware version may have been made around that time, and based on Currier & Ives’ print.

To read more about “The Arkansas Traveler,” you can visit http://www.arkansas-traveler.org/.

The listing for the stoneware version our 10/29 auction is available here: http://www.crockerfarm.com/stoneware-auction/2011-10-29/lot-23/Extremely-Rare-and-Important-Stoneware-Log-Cabin-Group-probably-Anna-Pottery/

It is remarkable to view what is probably the Kirkpatrick Brothers’ stoneware take on this folk story, and we thought you might be interested to know where this image came from.

For some time now, we’ve been talking about adding video content to our website, highlighting certain stoneware pieces or otherwise discussing stoneware and redware in a way that goes beyond the printed word. This is our first foray into what we hope will be a continuously growing library of videos intending to educate and expand upon our catalogs, blog posts, and other content. We are still working out the kinks, playing around with different cameras, lighting, locations, etc., but we thought you might enjoy these first two videos that Mark, Luke, and I put together about some of the highlights of our October 29 auction:

(In Mark’s cabin video, you will hear him reference the famous Eberly log cabin groups. If you’ve never seen one, you can view the one that the Smithsonian owns at the following address: http://historywired.si.edu/object.cfm?ID=375.)

We hope you enjoy them!