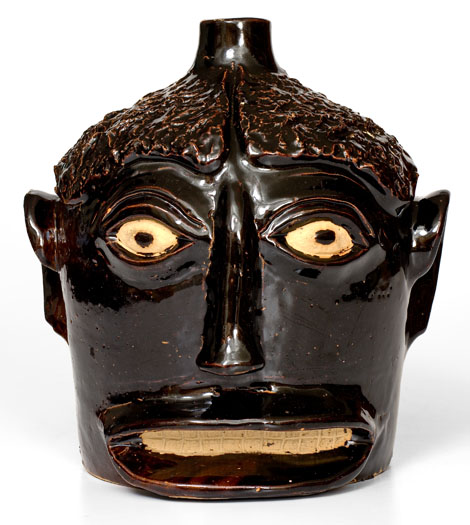 From both a research and collecting perspective, the last two decades have seen an incredible amount of interest focused on the wildest folk art creations of the American stoneware potters: face jugs, snake jugs, pig flasks, and other related forms. Often bursting with life and displaying a very high level of skill, these objects exude the personality of the potter himself in every component and fun detail.

In particular, I can think of no two schools of American ceramic production that have captivated museums, collectors and researchers more than those spearheaded by the Kirkpatrick Brothers of Anna Pottery in Illinois and the alkaline-glazed stoneware producers of Edgefield District, South Carolina. The former were the preeminent makers of American pig bottles and snake jugs; the latter, the most influential producers of face vessels. Rarely are these two schools of pottery production mentioned in the same breath, let alone studied as a cohesive whole. But there was an almost psychedelic spirit that overtook the American stoneware craft as the nineteenth century began to move toward its close, with ideas and styles being shared amongst all of the potters who allowed themselves to be captivated by it.

It is in this context that we can discuss an exceptional example of American stoneware folk art that we’ll be selling as part of our Fall 2020 auction of American stoneware & redware pottery: an elaborate Albany-glazed face jug made in the early 20th century by a young potter named Ernest H. Galloway in Paducah, Kentucky. Like, say, the well-known John Dollings in Muskingum County, Ohio, Galloway was a potter working in the shadow of Anna Pottery who, unlike the Kirkpatricks in Anna, enthusiastically embraced the face jug form. Born July 25, 1878 in Paducah, he and his brother, John, appear in that town’s 1900 census as potters. Their father was a railroad engineer, and indeed Ernest himself would take up the railroading profession, as well–his obituary calls him “a former Illinois Central fireman.” This has bearing on the pottery influencing Galloway in his own artistic life: Anna, Illinois, was not only about 45 miles as the crow flies from Paducah, but its own stop on the Illinois Central. Indeed, Anna pig flasks are frequently inscribed with railroad maps of which the Illinois Central was the primary line.

Also near Paducah was the heavily Anna-influenced pottery center of Metropolis, Illinois. Galloway was actually married in Metropolis to a local girl, their 1903 marriage record noting his occupation as “Potter.”

The 1910 census shows Galloway living in Paducah with his wife and two young children, his occupation given as “Jug Maker.” (Between the 1900 and 1910 censuses, he is also listed in Paducah city directories between 1900 and 1910. Some note his work on the railroad, but the 1904, 1908 and 1910 directories all reference his trade as a potter, the 1908 and 1910 ones specifically referring to him as a “jiggerman” at the Paducah Pottery Company. This long-lived manufactory run by pottery magnate J.A. Bauer was located at the corner of 7th and Trimble Streets.)

Ernest H. Galloway died young. On December 12, 1910, at only 32 years of age, his life was cut short by what the local death records call “heart disease.” Looking at his jug (which is signed on the bottom, “E. Galloway. Paducah. Ky.”), it is clear that Galloway had a considerable amount of skill. This is the only signed example of his we’ve seen, but there are a very few others attributed to him, based in part on one very distinctive feature: the pronounced part in the middle of the hair. A very unusual feature, we might ask ourselves why Galloway went out of his way to add this touch to multiple examples. In looking at family genealogies and photos of Galloway, we have our answer:

I have never seen another face vessel for which we have such a clear inspiration for one of its decorative elements. There has been much written, discussed and conjectured over the last many years on the origin of American face jugs, what their exact intended use was, what informed the so-called “grotesque” faces you see on many of them, and so on. This is an important new discovery, to see the potter in this case actually caricaturizing himself, delighting in giving his vessel a prominent attribute of his own.