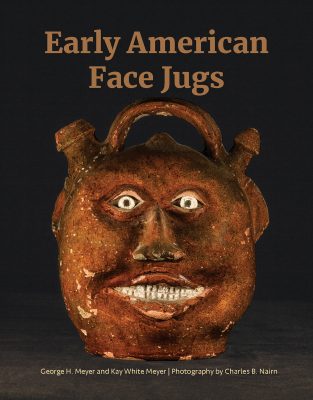 George Meyer and Kay White Meyer are on the cusp of releasing a landmark issue in the study of period American ceramics: Early American Face Jugs. With over 100 objects represented, this is the first book of its kind, putting one of the most beloved traditional American pottery forms in context and providing a truly sweeping, long-term, geographically broad-based perspective on their production. We were able to see a draft a few months ago and the collection the Meyers’ present is truly stunning, with large photographs detailing each object. Last I heard, it had not started shipping yet, but you can order your copy at the Sandringham Press website.

Over the last several years, interest in the American face vessel has reached a fever pitch, with the World Auction Record just being realized at our July 20th auction, and prices climbing ever higher. In addition to the Meyers’ new book, their collection is currently on exhibit at the Fenimore Art Museum in Cooperstown, New York (from June 28 to December 31, 2019). It perhaps goes without saying that it would be well worth the trip to Cooperstown to view this unparalleled assemblage!