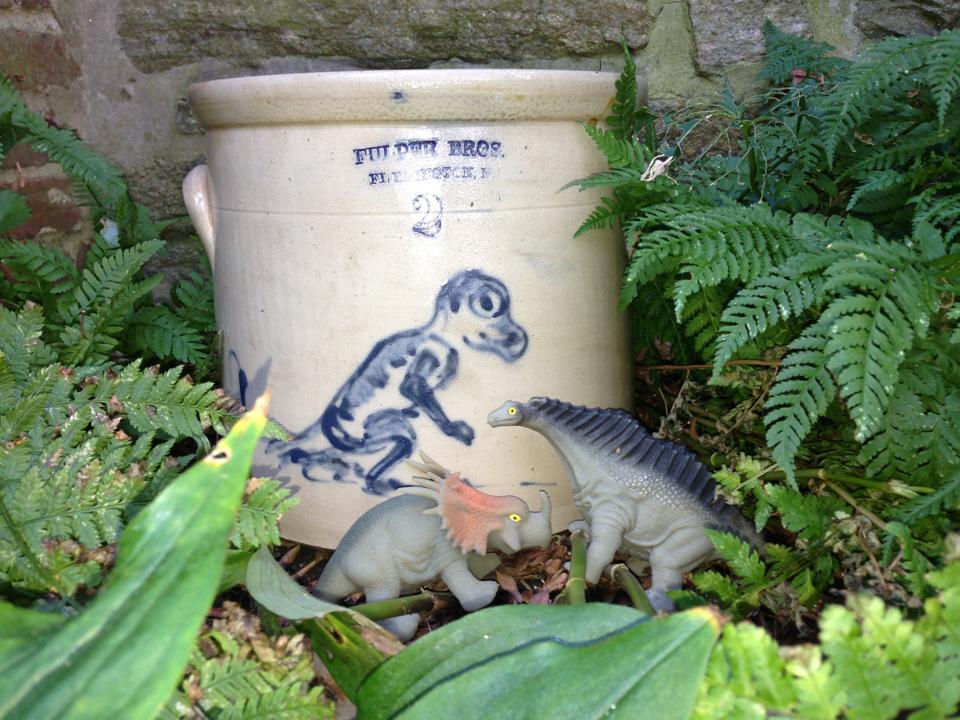 My brother, Mark, recently posted a photo on Facebook that a lot of people got a kick out of (see right). He captioned it with the clever phrase, “When Stoneware Ruled the Earth,” and as something of a dinosaur buff himself, he dug up (no pun intended) some interesting information on the history behind the dinosaur crock we will be offering on November 2, 2013. (By the way, if you don’t follow us on Facebook, please consider doing so. It’s a great way for us to keep in contact with everybody, and we try to add fun or interesting pottery-related posts on a frequent basis. You can check us out Facebook here.) If you had asked me when the first nearly-complete dinosaur skeleton was excavated I don’t know what I would have said. It seemed to me, at least, that man has had a good conception of dinosaurs for quite some time–but it was interesting to me to learn that the first aforementioned skeleton was not actually excavated until the relatively late date of 1858. Just as interesting, this momentous feat that informed our entire conception of prehistory took place not in some distant, untamed land, but in Haddonfield, New Jersey. The man who accomplished the excavation of this now-famous dinosaur was named William Parker Foulke. I hate to quote Wikipedia, but I liked this summation of him, from his Wikipedia page: “… Foulke was an abolitionist, prison reformer, pamphleteer, philanthropist, lawyer, historian and geologist.” Two decades before Foulke’s discovery, a local farmer named John E. Hopkins had found bones of dinosaur-sized proportions in a marl pit and proudly displayed them in his home. Following up on this, Foulke went full-bore in search of the rest of the skeleton, and what he pulled up came to be known by the scientific name Hadrosaurus foulkii. Joseph Leidy, a paleontologist who worked with Foulke, pronounced Hadrosaurus to be bipedal (walking to two legs), which was a big deal–the prior consensus being that dinosaurs were quadropeds.

Hadrosaurus was an herbivorous duck-billed dinosaur. By the late 1860’s, Foulke’s skeleton had been properly mounted and put on display in Philadelphia; at least one late nineteenth century rendering of the creature shows–like the mounted skeleton–a bipedal dinosaur with long tail and front limbs smaller than the hind ones.

About thirty years after Foulke’s discovery, roughly sixty miles north of Haddonfield, the potters of Fulper Brothers’ Flemington stoneware manufactory were also playing around in the mud–this time creating the only example of American stoneware we have ever seen bearing the image of a dinosaur. But what is remarkable to me–besides the striking, unique image emblazoned across the front of the vessel–is how close that image is to Foulke’s Hadrosaurus, bearing the same physical attributes I just described in the previous paragraph. It seems pretty apparent that this pot created in New Jersey is intentionally decorated with the image of the famous dinosaur likewise pulled out of New Jersey mud a few decades before. Indeed, New Jerseyans still take pride in their Hadrosaurus–in 1991, it became their official state dinosaur.

We are very happy to include, as part of our November 2, 2013 stoneware & redware auction, this amazing example–one in which New Jersey (and American) history and prehistory meet in a remarkable way.