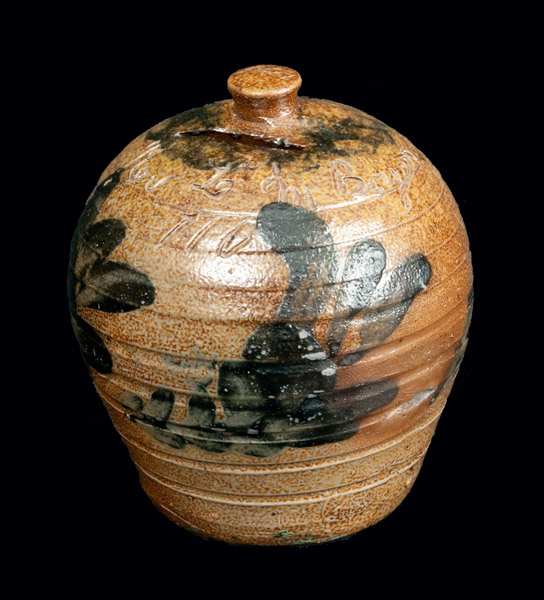 On March 2, 2013, we will be pleased to offer a stoneware bank made at the well-known Swank Pottery in Johnstown, Pennsylvania. The only Swank bank of which we are aware, this rare specimen’s story is enhanced by an inscription around the top, reading, “Rev. L.M. Boyer / 710.” Clearly made as a gift for the good reverend, the bank begs the question, “Who was Reverend Boyer?” Thankfully, we are able to answer that question in detail.

Levi Mitchell Boyer was born November 17, 1842 in Ashland Township (Clarion County) in northwestern Pennsylvania. At the young age of 18, following the outbreak of the Civil War, he volunteered for service in the 78th Pennsylvania Infantry and began a tour of duty in the South, during which he saw much action–including at the important Battles of Stone River, Chickamauga, Lookout Mountain, and Missionary Ridge. At the end of May, 1864, he was wounded at the Battle of New Hope Church, Georgia, and received his discharge along with other seasoned veterans of the 78th in November of that year.

Lucky to have survived his three years’ worth of fighting, Boyer entered the ministry, married his wife, Mary, and by 1870 was living in Burnside, Clearfield County, Pennsylvania–not far from Punxsutawney. By 1880, the couple, along with their children, had moved to Somerset, just down the road from Johnstown, and we initially believed that it was here that Boyer resided when the Swank pottery made him his bank. However, I have since learned that Boyer did, indeed, pastor the First Evangelical Church of Johnstown from around the early to late 1870’s, and it was clearly during his tenure there that the local pottery bestowed him with a gift. What “710” means, as inscribed alongside his name, is a mystery, but probably refers to something church-related.

Boyer held many high-level positions within the Evangelical Church throughout his life, both in western Pennsylvania and Ohio, where he would eventually settle. He seems to have moved around a lot during his tour of Christian duty in Pennsylvania, but would move to Canton, Ohio, in the early 1890’s, basically residing there until his death on November 18, 1931, at the age of 89.

It is unusual that we are able to gather this much information about a name we find inscribed on a piece of stoneware, and I think it is safe to say that Reverend Boyer’s bank is one of the more important examples of Johnstown pottery to surface in some time.

A Note about Sources: While I used various sources for this brief article, I would particularly like to credit this very helpful entry on findagrave.com.