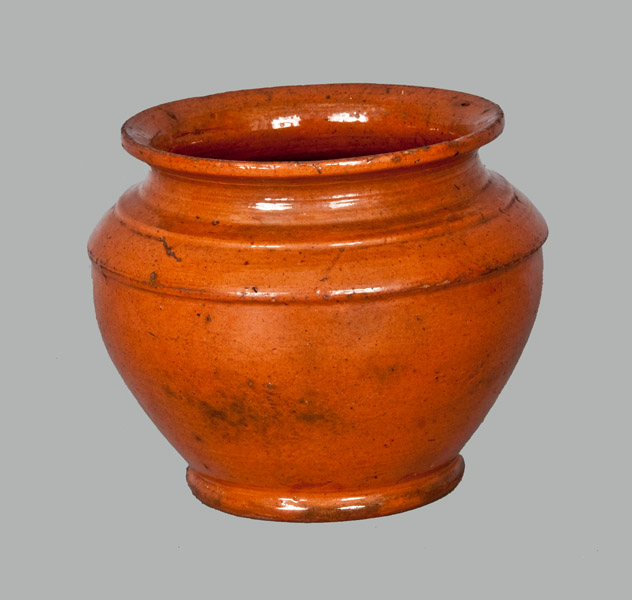 The Isaac Boyer redware sugar bowl we will be selling as part of our November 3rd stoneware and redware auction was of a mysterious origin until very recently. (Click here to read our catalog description of this piece.) It seemed to belong to Pennsylvania or elsewhere nearby, but as is always frustrating, Boyer did not bother to state where he was making his “Sager Bole”–and we could not be sure. We received an email from a kind individual who informed us that an Isaac Boyer was a potter in Vernon, Van Buren County, Iowa, beginning around the end of the 1850’s. Digging deeper into this, we found that that Isaac Boyer was born in 1828 in Pennsylvania–making the bowl (dated 1848) a product of a twenty-year-old, and one who very well may have yet resided in his home state at the time of its manufacture. That this is the same Isaac Boyer is a fact basically beyond question, and it seems that, after evaluating the evidence, his bowl was in fact a product of the redware center of Adams County, PA.

While I could provide a detailed run-down of the various census and other records that help flesh out Boyer’s life, the following paragraphs taken from a 1977 genealogy book basically do better than I could with only dry census data. While there is certainly a chance that some of this is at least slightly inaccurate, this is a remarkably detailed narrative of the life of a man who, when still apparently an apprentice, threw a pot that still interests us 150+ years later:

Isaac [Boyer] was the son of Martin Sr. and Hoover Boyer, and was [born December 5, 1828] in Adams County, Pa. … [His parents] lived and died [there]. [The] family used to go to Chesapeake Bay to gather shellfish. The father [died] in 1853 and the mother [circa] 1860, and the family drifted westward. [Note: I believe the correct date for the father’s death is 1833.] Isaac’s brother, Jacob, was the first to come to Iowa. He came with [two associates], bringing a load of liquor on a flatboat to New Orleans, then up the Mississippi and the Des Moines River to Farmington. He was in Indianapolis … from 1832-1842, and when he came to Iowa purchased 160 [acres] of land in … Henry Twp. of Van Buren County … . He married … and remained on the farm where [he and his wife] reared five children. … Isaac, the younger brother, had lived with a cousin, John Boyer, until he was 18 years old. He was then bound out for three years to learn the pottery trade. It was difficult to make a choice between pottery and carpentry, but his aversion to climbing on buildings caused him to complete the pottery apprenticeship. Training completed, he traveled from his Pennsylvania home with a wagon train bound for northern Illinois. He came on a steamboat down the Mississipi to Keokuk, and up the Des Moines River to Vernon [Van Buren County, Iowa], where his brother, Jacob, lived just west of the settlement. He obtained work at the Vernon pottery shop.

[Isaac married his wife, Sydney Harryman, on October 27, 1853 at her home in Van Buren County.] [The couple] lived in Vernon until 1839 [Note: this should read 1859, I believe–certainly not 1839] and [Isaac] continued to work in the pottery shop. He then bought a farm three miles west of Vernon … to which they moved. … In 1864 they bought the Harryman family farm from the heirs. They remained on the farm until 1893 when they moved to Keosauqua where he [died January 23, 1903].

(The above comes from Elijah Harryman … by Ethel Irene Harryman, 1977.)

Boyer’s bowl, then, would have been made while he was a couple of years into his apprenticeship in Adams County. Almost all of the records I have seen for Boyer list him as a “farmer,” and this was quite common for American redware potters–a subject I take up in an article I wrote last year about Philip Sipe of Lewisberry, Pennsylvania. Notice also that Boyer’s life is quite similar to that of Pennsylvania potter Adam Ownhouse, who crafted the outstanding redware inkstand we sold in March 2011 (and also a bird whistle in the collection of the Met, I recently learned)–and then, too, left for Iowa.

Boyer’s “Sager Bowl” stands as a remarkable example to which we can attach rare biographical data–and one that, unlike the many anonymous pots of people we will likely never identify as anything more than “farmers,” we can now firmly attribute as a rare signed example of beloved Adams County, Pennsylvania, redware.