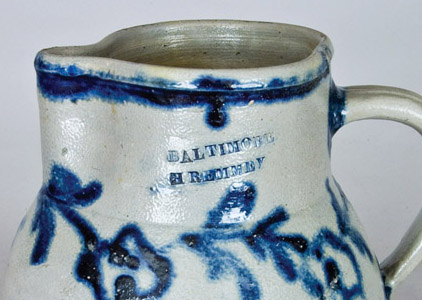 This year marks the bicentennial of the War of 1812, but it also marks the bicentennial of an event that–while perhaps nowhere near as impactful on the history of our nation as that aforementioned conflict–did leave an indelible imprint on the history of American ceramics. It was two hundred years ago that Henry Remmey, a remarkable Manhattan potter who had fallen on hard times, moved to Baltimore and quickly set the standard for stoneware production in the Mid-Atlantic region. (If you have any doubt as to what Henry Remmey accomplished in Baltimore, please also have a look at Luke’s article on the earliest dated piece of Baltimore stoneware, also made in 1812.)

It recently came to my attention that The Chipstone Foundation has posted Luke’s important article, Henry Remmey & Son, Late of New York, online for free reading. That article appeared in the 2004 edition of Ceramics in America (published by Chipstone), and was the first to not only flesh out the “lost years” of a man who was arguably America’s greatest stoneware potter, but the first to reveal the long-mysterious origin of “H. MYERS” stoneware. Luke managed to correct a long-standing misconception with his research–one that I am reminded of whenever I see, on now-very-rare occasions, someone label an “H. MYERS” pot as a product of Philadelphia. Having spent many an afternoon with Luke down at the Maryland Historical Society and at the State Archives in Annapolis, the publication of this article was very gratifying for me, and I think it is remarkable that he was able to contribute one of the more important articles published on American stoneware in the last few decades, when he was still in his early twenties.

This article is a comprehensive look at Henry Remmey’s years in Baltimore. I know it is the nature of the passage of time, but I am always amazed whenever–on a trip to Little Italy or elsewhere nearby–we drive by the federal housing project that now occupies the site of a place where some of my favorite pieces of American art were crafted. When you click on the link to read it (below), you will see one image on the left-hand side of the article. These images (with accompanying captions) can be clicked through via the arrow beneath the image.

I am also including, for those who have not seen it or would like to revisit it, Luke’s excellent overview article on Baltimore stoneware, which appeared in Antiques & Fine Art in 2006. This, again, served to educate everyone on what was actually made in Baltimore: the long-standing misconception in this case being that the central figure in Baltimore stoneware production was Peter Herrmann (because he was virtually the only one, later on, who marked his work), and that besides the ubiquitous “clover” designs, Baltimore had very little to offer in the way of stoneware. This was, of course, completely wrong, and Baltimore was one of the chief centers of stoneware production in the entire country, with many prolific artisans churning out their ware.

Finally, because it is such a good resource on what is actually “out there” in terms of Baltimore pieces, here’s a link to our Baltimore stoneware highlights. This is just a fraction of the Baltimore pottery we’ve sold over the past several years, but this gives a great idea of what the best pieces look like:

I am very excited to be able to discuss Henry Remmey, Sr.–one of my very favorite potters–alongside Thomas Commeraw and others on October 13 at the Gunn Museum in Washington, CT. You can read more about Mark’s and my lecture there by clicking here.