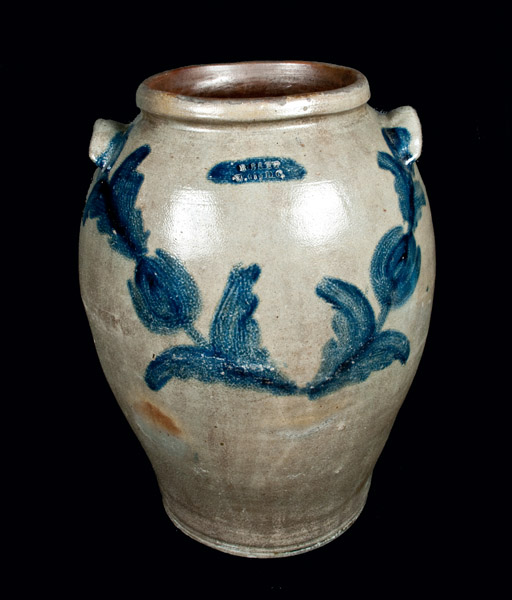 In my article on Washington, D.C. stoneware that appeared in the Autumn 2010 issue of Antiques & Fine Art, I put forth what seems to be the predominant view amongst those who have studied Washington stoneware, and one I share based on years of incisive research–that Butt was “[c]learly not a potter himself.” For those unfamiliar with (but interested in) this subject, please have a look at that article, which is available for free download here; we will be selling an example of Butt’s stoneware on March 3, 2012, and I found this a good opportunity to revisit the subject.

Richard Butt’s stoneware is the most famous of all that made in our nation’s capital, his fairly scarce maker’s mark being the most commonly seen on stoneware produced there. Butt was born into a prominent Montgomery County, Maryland, family and there have been, previously, no real indications that he was a potter. Around 1826, he purchased the earthenware pottery of a virtually unknown local potter named Whitson Canby. Referred to at least in a loose sense as the “Fair-Hill Manufactory” after a nearby home of the same name, apocryphal stories circulating in newspaper articles dating back to the 1940’s tell of eight families of Irish pottery workers who Canby housed in Fair Hill; the ghost of a potter who supposedly hanged himself in the basement was said to haunt the premises prior to it burning to the ground in 1977. (This fact, along with some other interesting tidbits, had to be cut from my article due to necessary space constraints. I hope at some point to put more of my information “out there” in one form or another.)

Earlier in the decade, Butt had run for sheriff in the county, and had also served as deputy sheriff. By around 1830, he moved down into Washington, D.C., and was not only operating a pottery there, but was soon also superintending the Washington Asylum (the local poorhouse)–a job he continued to undertake until 1847, when he was removed for malfeasance. (That saga could constitute a fairly lengthy article in itself.) He also seems to have continued his association with local law enforcement for most of his life; in 1850 he was a participant in the virtually forgotten but nationally scandalized Chaplin affair, in which he and others prevented a local abolitionist from ferrying two runaway slaves into Maryland; Butt was wounded in that altercation. In 1863, President Lincoln appointed him Commissioner of the Metropolitan Police.

Butt turned his pottery over to prolific potter Enoch Burnett around the mid-1840’s, and there is no evidence that he continued any association with the pottery business after that time. In the 1860 census, he shows up as a “Gardener + Toll-Gatherer,” indicating that he was primarily a farmer at this point. But perhaps more importantly, that listing, combined with the rest of his history, shows what was a tendency on Butt’s part to gravitate toward bureaucracy and local government affairs. To make what could be a long story short, quite simply, I have believed for a long time that Butt was basically a merchant-type figure who owned his pottery shops as either a primary income source or perhaps a way to supplement his income. Hugh C. Smith (in nearby Alexandria) and Henry Myers (up the road in Baltimore) are two very good examples of comparable merchant figures who paid potters to make their ware.

We know that one of Butt’s potters was John Walker–until the publication of my aforementioned article, a potter of completely unknown origin, who seemed to have potted briefly in Washington and then fallen off the face of the earth. In actuality, Walker was an English-born salt-glazed stoneware potter who ended up moving down to Kentucky after working in D.C. The work, though, at Butt’s shop is inconsistent in the way that would be expected for a merchant enterprise, where various master potters were superintending the shop.

All of this being said, I have recently come across some interesting information that suggests that Butt may have been, after all, a potter. If he was, I believe he was not a particularly skilled one, probably, and based on his other duties, was probably quick to let other potters perform the bulk of the work for him.

The first piece of evidence I located was a copy of an 1862 petition Butt submitted to the federal government, asking for around $1800 in compensation for slaves he had owned that had been freed under the D.C. Emancipation Act. This petition included two signatures of Richard Butt, and I can’t help but think they bear a striking resemblance to the two “R. Butt” inscriptions on the jar we sold in July 2008. At the time, we firmly believed that while the jar was made at one of Butt’s potteries (probably the Montgomery County one), it was merely inscribed by a potter in the manner of his apparently later maker’s marks–not by Butt himself. If the ink and cobalt signatures could be determined to match, I would say that would amount to essentially conclusive evidence that Butt was a potter. The second is a real estate advertisement Butt placed in a D.C. newspaper in 1829, which begged, “For further particulars inquire of Mr. Richard Butt, Stone Potter, on 7th Street.” I do not discount the fact that at times pottery owners who were not actually potters were called so in certain period documents, but they would have been done so almost exclusively by third parties who were misspeaking. In this case, Butt himself ran the ad, but whether or not he actually wrote the advertising copy is a question I cannot answer. While, regardless, this does move the scale somewhat in favor of Butt himself being a potter, if Butt penned the words I quoted above, I would say he was, in fact, a bona fide potter. Washington, D.C. stoneware is a topic I have spent a long time researching, and one that has been very difficult to crack. All the hours my brother, Mark, and I spent at the MLK Memorial Library–just around the corner from Butt’s pottery–are a testament to that, and it still took me years to break down some of the brick walls that enabled me to eventually write my article. Even today, composing this brief article, I came into its writing still unsure whether Richard Butt was a potter or simply a businessman; however, looking over the signatures, rereading the real estate ad, I can’t help but think that Richard Butt was probably, in actuality, a potter. If so, as I said above, he probably was quick to let others work for him, turning his interests to other pursuits. The sole jar that could, in this case, be attributed to Butt himself, was not particularly finely thrown, and bears a decoration not really seen on other area pottery. As with all of my various research pursuits, I will eagerly continue to try to flesh out the story of the potters of our nation’s capital–and hopefully this question, along with others, will eventually find its resolution.