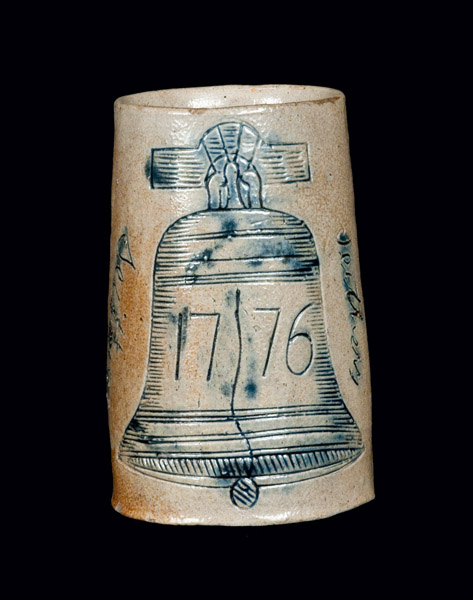 In or about 1873, two local cigar makers and a potter from West Troy (now Watervliet), New York, decided to throw their hats into the competitive ring of Philadelphia stoneware manufacture. The result was the completely forgotten pottery concern of “Salinger, Radley & McCusker.” Located in the Frankford / Port Richmond area of the city, the trio’s pottery establishment was dangerously close to one of the more prominent in the entire country, that of Richard C. Remmey–at the time, the latest fruit from the most venerable tree of American stoneware potters. Why the two cigar makers, John P. Salinger and Patrick McCusker, decided to partner with a 45-year-old, not-particularly-successful potter from upstate New York is a question whose answer disappeared along with the ill-fated firm that bore their name. But that potter was none other than Aaron Oliver Radley, born on November 14, 1828 in Albany, New York. His time and place of birth were opportune for anyone wishing to venture into the stoneware business, the prolific shop of Paul Cushman being in full swing at that time, as was that of Moses Tyler and Charles Dillon. When of apprenticeship age, Radley had many convenient, now-famed stoneware shops in which to try his hand at the wheel, most prominently those of William Warner; Nathan Porter (and his associate George B. Fraser); Israel Seymour; Moses Tyler–all within the Albany-Troy corridor. Radley was noted as a potter working in West Troy circa 1853-66 by Warren Broderick and William Bouck in their 1995 book, Pottery Works: Potteries of New York State’s Capital District and Upper Hudson Region. By 1860, he had married his wife, Elizabeth, and had a few children. He seems to have ended his long-time tenure in the Albany area and immediately traveled to the City of Brotherly Love, where he was potting by 1867 or so, and it was probably the Remmey manufactory that drew him there. But within about five years, Radley was definitely operating his own pottery, under the moniker of “Salinger, Radley, & McCusker.” And it was probably under the auspices of that firm that Radley produced the sole piece of stoneware attributable to him, a mug decorated with an elaborate Liberty Bell design and the accompanying date “1776.” My belief is that it was made in or about 1876, to commemorate the American centennial. Radley made his mug for someone with the last name “Seithers,” that name appearing to both the left and right of the Liberty Bell design. There were a few different individuals in Philadelphia (a family of barbers) during the time period named “Seither,” but the only one I can find who consistently seems to have gone by “Seithers” is also the only man in the entire country who shows up with that last name in the 1880 federal census index: Charles W. Seithers, a Philadelphia tavern keeper and lager seller working over on South 3rd Street during this time period. Charles William Seithers was born on or about September 13, 1838 in Bavaria, and emigrated to America in 1852. By 1870, he had married an American woman, had a little girl, and was working as a hotel keeper in Philadelphia. This occupation may have been essentially the same as “Saloon keeper,” the job he shows up at ten years later, in the 1880 census. But Seithers was not just the proprietor of a bar room, he was specifically involved in the relatively new American business of lager beer.

Lager was not really available in the United States until around 1840; some speculate that its relatively late introduction into American homes and pubs was due to the difficulty of transporting its yeast across the Atlantic. The first known American lager brewery was located in Philadelphia, where a Bavarian immigrant (like Seithers) named Johann Wagner successfully managed to get his yeast over from Germany. Initially popular in German communities, lager spread nationally and by the late 1850’s, it was a bigger seller than either ale or porter in Philadelphia. Charles Seithers’ business came as a direct result of this booming new beer industry, and he shows up around the middle of the 1870’s–about the time Radley made his mug–as a lager dealer, perhaps even a brewer.

How Aaron Radley knew Charles Seithers–or if they were even friends or close associates–is a question I cannot answer. But based on the fact that his mug was specifically, boldly inscribed to Seithers (and hand inscribed on the bottom by Radley), the mug was pretty clearly a presentation piece, and probably made as a gift from Radley to Seithers–as is the case with other comparable pieces of American stoneware. This puts Radley’s mug in a fairly rare category. We can call it so for a number of reasons–the fairly rare form for decorated stoneware; the almost unheard-of decoration of the Liberty Bell; its signature from a previously unknown Philadelphia potter. But as a vessel apparently used specifically for the consumption of lager, unlike so many of the jugs and other vessels made for ambiguous spirituous (or other) liquids, we more or less know exactly what the mug held on a regular basis. By 1877, Patrick McCusker had left Radley’s firm, and it took on the name of “Salinger & Radley.” By the end of the decade this partnership, too, seems to have dissolved and Radley was out on his own. In his later years (around 1885, when he was about 57 years old), he became a grocer and, eventually, a jeweler, maintaining that profession into his 80’s. Aaron Radley died on Halloween, 1914, of some form of pneumonia. Seithers had died a decade prior, on March 8, 1904, of kidney failure at the age of 65. He, too, had given up his profession of the mid-1870’s, and had moved on to barbering. In Radley’s obituary, those memorializing him called him, “one of the oldest residents of Frankford … who opened the first China and glassware house in that section of the city.” I have been unable to find any reference (though one certainly may exist) to Radley owning a merchant’s shop, selling china or glass, and I believe this is probably the case of time or miscommunication getting in the way of the facts. The writer was probably really referring to Radley’s old pottery.

This is yet another case in which two men who may not even be remembered by their own families today, are memorialized by just one object that happened to survive. Aaron Radley probably made thousands of pots in his lifetime; Seithers likewise would have owned countless objects over the course of his life. But this mug, probably produced in the spirit of giving, now gives us another opportunity to peer dimly into the past.

A Note About Sources: As can probably be gleaned from the text, I used applicable Philadelphia city directories, newspapers, and death records, as well as federal census listings for the bulk of my research. For secondary, modern sources, (as noted in the text) I used Broderick & Bouck’s Pottery Works …; for the section on lager, I used Mark A. Noon’s Yuengling: A History of America’s Oldest Brewery heavily.