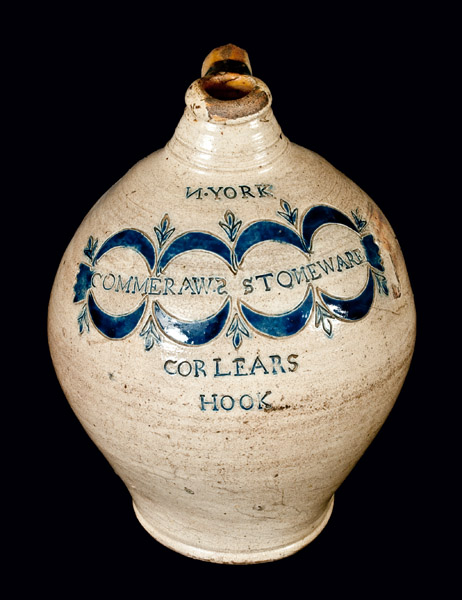 For those of you who may have missed it, my Commeraw project and the two examples of Commeraw’s pottery that we will be selling on the 29th were both featured in today’s issue of The New York Times. Click here to read the article.

Those who have kept up with my various updates have seen me comment on the remarkable life that Thomas Commeraw led; but Eve Kahn’s article in today’s paper is the first time I have spoken in any real detail about this man’s story. Sometime in 2003, a chance encounter with a census record embarked me on a quest that has more or less consumed the last eight years of my life. Since that time, I have gone a long way toward fleshing out the life of a man whose identity somehow slipped through the fingers of history. Someone who once burned a kiln with regularity near the beach of the East River, whose name was well-known throughout Manhattan and beyond–not only for the mark he left on thousands of pots, but for the mark he sought to leave on American (and world) history–essentially vanished for almost two centuries.

My study of Commeraw has, naturally, taken me beyond the potter himself, into realms of American history that have little to do with stoneware–the story of people and places that populated the world in which Thomas Commeraw lived. One of these people was an oysterman named Daniel Johnson. In the fall of 2005, we sold two stoneware oyster jars clearly made by Commeraw, one of which was marked, “DANIEL / JOHNSON. AND Co No 24 / LUMBERSTREET / N. YORK.” A few years ago I set about to try to establish the identities of the few known people for whom Commeraw turned his ware. In so doing, I determined that Johnson, too, like so many New Yorkers ensconced in the oyster trade, was a free African American. We were privileged to be consigned another one of the oyster jars Commeraw made for Daniel Johnson, and it, along with the monumental Commeraw jug, will be sold on the 29th.

Thanks to everyone for taking interest in this remarkable story, and I look forward to sharing more of it with you soon, as I get closer to completing my long-labored-over book on the life and times of Thomas Commeraw.