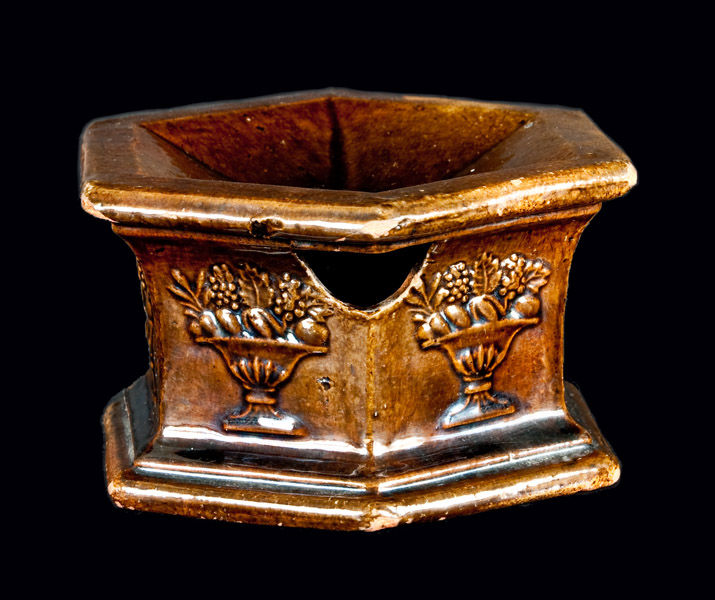 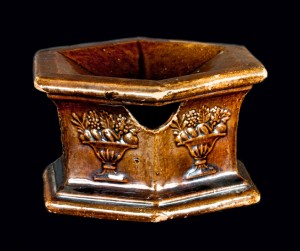 There were far fewer stoneware manufactories than redware potteries in the United States. While now and then a farmer would build a kiln in his backyard and start making stoneware to supplement his income, the all-around investment in founding a stoneware operation was clearly more substantial than that required to start producing redware. This investment included a kiln capable of achieving and withstanding the higher temperatures needed to fire stoneware; a knowledge of the more complicated stoneware production process (including how to properly salt glaze); and procurement of proper stoneware clay, not as easily found as earthenware clay. In viewing their surviving works, it is often quite easy to tell which potters used clean stoneware clay obtained from a “reputable” source, and those that pulled it out of the backyard or otherwise dug it themselves. Redware, on the other hand, was comparatively easy to make. Good clay could, in fact, be frequently found in a potter’s backyard, or in a farmer’s field. The temperature the potter needed to reach in the kiln was several hundred degrees Fahrenheit below stoneware temperatures.

Because of this, rural redware potteries abounded in nineteenth century America. People who were primarily farmers but had been trained to throw on a wheel would, in fact, build a kiln on their property and sell their wares to their community and beyond. One such artisan was Philip Sipe, a York County, Pennsylvania, farmer born around the turn of the nineteenth century. The only contemporary document of Sipe’s career as a potter that I have ever seen is his impressed maker’s mark, found on one finely-made redware spittoon. In letters belonging to a bygone time, the potter stamped the bottom of the spittoon with a larger, more elaborate mark than that usually seen on American redware: “P. SiPE & SONS / LEWiSBERY / YORK Co PA.” But aside from the fact that a man named William Sipe was later a notable stoneware potter working in Williamsport, Pennsylvania, in the mid to late nineteenth century, I had never heard of Philip Sipe. Perhaps owing to what seems to have been Sipe’s insistence on calling himself a “Farmer,” people who have spent a lot of time researching central Pennsylvania redware potters have never heard of him, either.Sandy Wexler film trailer 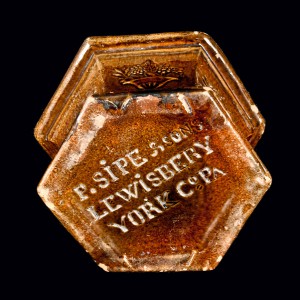 Jeannette Lasansky, who wrote two great, concise books on both central Pennsylvania stoneware and redware (Made of Mud … and Central Pennsylvania Redware Pottery …) performed exhaustive work in her research of these redware potters. According to Lasansky, there were many potters working in the vicinity of Sipe’s pottery from at least the late 1810’s, but Philip Sipe was not one of them. In the 1850 census, again, many potters are listed in Lewisberry Borough (quite small at the time) and adjacent Newberry Township–the latter being the apparent actual, proper site of Sipe’s works. In that same census, Philip “Seip” is listed as a farmer, born in Pennsylvania around 1802; apparently a widower, his oldest family member was his son, William, also called a farmer.

But these men were just as adept at turning pots as they were at turning up fields. In the 1860 census, Sipe was still telling the census man that he was primarily a farmer, as was his close neighbor, John Knisely–an otherwise-documented redware potter whose son, Henry, was the only person on Sipe’s census page that year willing to call himself a potter. John Knisely’s potting career is noted in Lasansky’s Central Pennsylvania Redware …; it wasn’t until the 1870 census rolled around that he finally gave his occupation as “Potterer.” That the Kniselys were somehow involved with the Sipes and their heretofore forgotten pottery seems fairly evident.

One of these Sipes, the aforementioned William, was, in fact, the potter who made his way up the now-Route 11 and 15 corridor and was making stoneware by sometime in the 1860’s. Salt-glazed stoneware jars made in the predominant central Pennsylvania style bearing the marks “SIPE & SONS” and “SIPE, NICHOLS & CO.” are the products of William Sipe’s shop. An 1892 book, History of Lycoming County, Pennsylvania (by John F. Meginness), confirms William’s potting lineage: “WILLIAM SIPE, deceased, was born in York county, Pennsylvania, in 1826, and was a son of Philip Sipe. He settled in Williamsport in 1863, where he soon after engaged in the pottery business, which he had learned from his father … .” Lasansky’s book on stoneware, Made of Mud, is also one of the best sources on William Sipe’s Williamsport shop. In it, she repeats the History of Lycoming County account, but–again owing to the paucity of proper references in the historical record–did not know where Philip worked, or what he made.

Philip Sipe’s spittoon is an example of a piece of pottery that transcends its status as a decorative arts object and plays the role of a paper document, imparting information where the historical record is less than forthcoming. Sipe’s potting career reminds me of another deft Pennsylvania potter whose primary career of farming sandbagged all modern attempts to connect an artist with his work. Absalom Bixler, whose redware stands today as some of the finest ever produced in the United States, was, as Lasansky wrote in another work on Lancaster County redware, never called a potter in contemporary documents. No trace of his career as a potter could be found on any period piece of paper. As late as 2003 a great, comprehensive article on Bixler’s work appeared in The Magazine Antiques, and even the author of that article was unable to take a definitive stance on the authorship of the “BIXLER” pieces. It was not until early last year that the surfacing of a small pot stamped “A. Bixler” (in a manner only performed by potters themselves, and in a typeface consistent with Absalom Bixler’s known career as a printer) enabled me to once and for all conclusively establish Bixler as the maker of his own work. (You can read my article on Bixler here.)

It is somewhat bizarre, or ironic, that people who lived lives spent, mostly, away from the potter’s wheel, are now remembered only for what they did while at it. An activity undertaken only in the winter months, or otherwise when farming was inconvenient or impossible, has come to define so many of these sorts of redware potters. But where so many others came into this world and then slipped from history, these men who made objects to fill the needs of their community have somehow managed a different fate. Even when paper documents fail us, and family members have forgotten they existed, their work remains to do the talking for them.