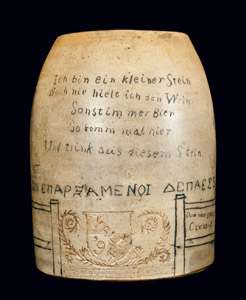 The existing group of stoneware mugs made for Yale University students around the turn of the twentieth century are an interesting lot. Quite scarce–they were, after all, made for a rather small population of college students–these vessels were clearly prized by enough alumni that a fair number were passed down to us. While some are typical late nineteenth- and early twentieth-century examples coated in brown Albany slip, others are salt-glazed; these latter pieces, if not baring clear dates, could easily be mistaken as much earlier American stoneware products. It is one of these–a particularly well-crafted example–that we will be selling on March 5.

While heavily decorated American stoneware mugs are themselves rare, I consider the Yale mug to be something close to a unique, hyper-specialized form unto itself. Not just drinking vessels, these were predecessors of the ubiquitous university memorabilia we interact with every day: sweatshirts, baseball caps, and modern, mass-produced mugs. In the case of the F.T. Persons’ mug, which we will be selling in March, we actually know a lot about the young man for whom it was made.

Frederick Torrel Persons was born on February 2, 1869 in Sandisfield, Massachusetts, about thirty-five miles west of Springfield. His father, Byron Persons, was a farmer; he and Frederick’s mother, Ellen Spaulding, were both descended from very old Massachusetts families dating back to the 1630’s. Frederick Persons attended preparatory school in Norfolk, Connecticut, and went on, as his mug attests, to Yale College, from which he graduated in 1894. After some postgraduate work in the study of English, he became an English teacher and later the principal of a school in Falls Village, Connecticut. In 1899, he enrolled in Union Theological Seminary in Manhattan, and after graduating three years later, he entered the ministry, serving various churches in Connecticut.

]In 1906, Persons married Florence Cummings, who had attended the Yale School of Music, and the two would go on to have at least three sons. At the age of 46, he left his ministry in Connecticut for a post as librarian at Bangor Theological Seminary in Bangor, Maine, and remained there until 1924, when he took the same position at the Congregational Library in Boston.

In Yale-related publications Persons spoke of his love of architecture, on which he became something of an authority, and his fondness for taking walks as a form of exercise. He also expressed a love of life, saying, when about 45 years old, “I am glad to be alive and want to live to do something for the world and to watch it go on till I am past eighty. Above all else, I am proud of [the Class of] ’94, and rejoice in the welfare and success of its members.”

Persons’ goal to live past eighty was almost realized. He passed away at the age of 79 on September 2, 1948.

All too often, objects are handed down to us, stripped of any memory of the men and women who handled them on a daily basis, who kept them on shelves in their homes. Pieces like Persons’ Yale mug remind us that real people with real lives actually owned these vessels, and they were capable of holding more than just water or beer, but also great significance to those who chose to keep them.

A Note About Sources: The Yale-related volumes from which most of Persons’ biography was gleaned are Quarter Century Record, Class of 1894, Yale College, and Vicennial Record, Class of Eighteen Hundred and Ninety-Four, Yale College, both by Frederick Dwight, Class Secretary. I also used Union Seminary Quarterly Review (May, 1949), Who Was Who In America, Volume 2 (1943-1950), and the Federal Census.