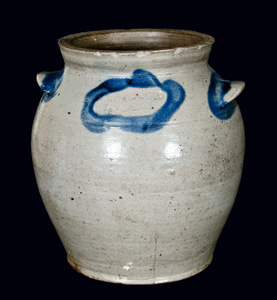 Growing up in the Baltimore area in a household filled with stoneware, it was easy to gain a distinct appreciation for the work of the Alexandria potters. My father and mother would bring “new” pieces of stoneware into the house on a regular basis and, taken as a group, those that bore the abbreviated word “ALEXA” were probably our favorite. The wild, bizarre slip-trailed decorations that many of them bore were unlike anything we had ever seen, stoneware-wise. Even the pieces with more “standard” designs–those derived from the work of the nearby Baltimore potters–were often extravagantly covered in bright floral decorations that demanded our attention. Adding to all of this, their maker’s marks, set in typefaces clearly belonging to a bygone age, piqued our curiosities, and made us wonder just who these people were, whose names were permanently set in stone.

While the Baltimore potters of the time period–whose work we also encountered on a regular basis–decided out of humility or haste not to bother marking their ware, those from Alexandria left little mystery as to the origin of their products. And the names of these people who had died well over a century before became a part of our daily, modern existence. The ones we knew well, and saw the most, were “B.C. Milburn” and “H.C. Smith.” The former, Benedict Milburn, was a potter; the latter, Hugh Charles Smith, was a merchant. A fellow Alexandria merchant, E.J. Miller, also left behind a fair amount of products, and we saw his name not only stamped in the familiar Alexandria typeface, but stenciled in blue on jars made in southwestern Pennsylvania and shipped into Virginia. There were names we rarely saw but were always on the look-out for: “J. Swann” (John Swann, in some ways the father of Alexandria stoneware), “J. Black” (James Black, an associate of Milburn’s who operated a short-lived pottery of his own), “Hugh Smith” (the father of merchant H.C. Smith), and “J.P. Smith” (another merchant relative). We weren’t the only ones constantly keeping an eye out for stoneware made by this latter group; it was, and continues to be, highly prized by collectors of pottery made in the D.C. area.

Literally ten years ago this month, we came across a perplexing jar bearing a mark we had never seen before: “MILLER / ALEX.” This vessel was clearly not one of the later E.J. Miller products; the jar itself belonged to an earlier time than they did, with an ovoid form, fairly crude handles, and a slip-trailed floral design unheard-of on examples made for that Miller. We began to think that perhaps this jar was made for Miller’s father, a prosperous merchant named R.H. Miller, whose name is not seen on any known examples of stoneware. Stamped with a last name familiar to collectors of Alexandria stoneware, there was little doubt to us that the maker’s mark referred to some member of that merchant family. But we decided this mark–one that in all our years of buying, selling, and studying Alexandria pottery, we had never seen or heard of–was worth investigating further.

We took a trip to Alexandria, to the Barrett Branch of the Alexandria Library in Old Town, which holds a wealth of documents related to the history of the city. It didn’t take long, once we began thumbing through various texts ranging from genealogy books to pottery-specific manuscripts, before we were shocked to discover that there had been a barely-documented Alexandria potter named James Miller.

James Miller’s existence was noted by at least a couple of previous researchers of the Alexandria potting industry–a man named John Pickens who compiled notes on the subject in the 1970’s (and whose papers are now in possession of the aforementioned library) and Suzita Myers, whose book The Potter’s Art was essentially the first book on Alexandria stoneware (and one of my family’s favorite stoneware books). But Myers never mentioned Miller in that book or any of her other published materials; she discussed him in an unpublished Master’s thesis for the University of Maryland, and in it noted the existence of a jar impressed “J. MILLER / ALEX” packed away at the Smithsonian. But without any known pieces in the light of day, without any in the possession of collectors, and with only obscure, unpublished sources to draw from, James Miller had completely slipped through the cracks as an important Alexandria potter whose work still existed. Even Barbara Magid’s excellent 1995 article in the Journal of Early Southern Decorative Arts, “An Archaeological Perspective on Alexandria’s Potting Tradition,” which drew from Pickens’ notes and mentioned Miller, did not note the existence of any surviving stoneware vessels by James Miller–since none, for all intents and purposes, had been discovered.**

Compiling all of this information and considering our jar, it became apparent that we now possessed one of the rarest Alexandria stoneware vessels to surface in years, and one of the most important to ever be found. My brothers, Mark and Luke, and I ended up researching Miller further and Mark and I eventually wrote an article (“James Miller: Lost Potter of Alexandria, Virginia”) on him and his work. You can read it in the 2004 edition of Ceramics in America, and I am continually pleased when I see a rare example surface or hear people talking about Miller alongside other Alexandria potters.

It wasn’t long after discovering the James Miller jar, on October 1, 2001, that we launched crockerfarm.com, and it was experiences like this that naturally compelled us to place incisive research at the forefront of everything we do. Something I never really saw myself doing growing up (cranking microfilm, combing through all manner of old documents) has been extremely rewarding–on a professional level, but ultimately, and primarily, on a personal one. Like Thomas Commeraw, Henry Remmey, David Parr, and many other potters whose lives and work we have brought into the light of day, it is fulfilling to be able to help give people their identities back.

For our March 5, 2011 auction, we have just received one of the few surviving examples of James Miller’s work, and I wanted to share it here, along with the back story on Miller that we weren’t really able to tell within the more proper confines of Ceramics in America. (Note that this jar has the same offset handles–one ear higher than the other–that we discussed in our article.) The fact that we found that first specimen almost exactly ten years ago is a coincidence that has given me the opportunity to reflect on something that began as an ordinary occurrence–bringing another crock into the house–and ended up having a significant impact on my life.

** When Mark and I were writing our article on Miller, Barbara Magid of Alexandria Archaeology was extremely generous in letting us view, handle, and photograph shards of redware sugar jars made by James Miller in Alexandria (and excavated in the late 1980’s from a local sugar house). These shards, amongst countless others that were unmarked, were stamped with the now-familiar “J. MILLER / ALEX” mark. I just wanted to acknowledge her for her generosity and her invaluable work in reconstructing the ceramic history of Alexandria.