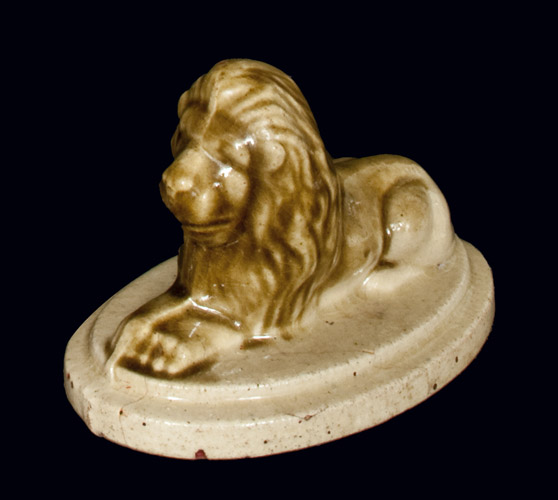 This is the story of a man whose middle name was “Omega.” One of the better middle names I have ever run across, it probably derived from the Christian epithet for Jesus, “the Alpha and Omega.” The grandeur of this middle name was belied, a bit, by the ordinary, typically American name of the man who bore it: Dan Thomas. Dan, like countless other potters, pottery workers, and artisans of all stripes, slipped in and out of life without making an indelible mark on the history of his trade. But as a sixteen-year-old boy, he cared enough about a small, molded stoneware lion he made to inscribe the bottom in his haphazard handwriting–and it is thanks to this artifact that we can now recognize Dan as part of the grand history of American ceramics.

Dan Omega Thomas was born on March 9, 1877 in Thomastown, Ohio, “a considerable village … two miles south of Akron–composed largely of coal miners, mostly Welsh, who … worked the coal mines of that vicinity.” Dan was the son of one of these sorts, a coal-mining Welshman; his mother had immigrated from Wales, as well. In 1893, while just sixteen years old, Dan was already working at some neighborhood pottery, of which there were several. On December 13 of that year, possibly as a Christmas gift, he molded a stoneware figure of a reclining lion, decorating the beast with some sort of brown glaze. On the underside, he scrawled, “DAN OMeGA THOMAS / THOMASTOWN / DEC 13 1893.”

The extremely prolific Akron potteries put bread on the table of Dan’s family, at least several of whom worked in their shops. Dan’s nephews, Daniel and Ben, both found employment at the Whitmore, Robinsons & Co. (“one of the most extensive and complete establishments of its kind in the United States,” and located at the nearby corner of East Market Street and Case Avenue) circa 1900. His brother, William, was a potter, and it was probably he who produced a molded fish pitcher–with a fairly similar glaze to his brother’s lion–pictured in The Potters and Potteries of Summit County …, by C. Dean Blair. A few other Thomas’s show up as potters in the 1900 Akron city directory, as well, but I have not determined if they were relatives. 1900 is also the first year I found young Dan in the directory, where he was apparently working at the Akron China Company on Second Ave., by the Cleveland Terminal & Valley Railroad, producers of “White Granite and Porcelain Ware.”

Dan’s whole neighborhood was rife with potters in that year–so full of them, in fact, that the census taker bothered to differentiate their various functions at the manufactories. Many, like Dan, were simply “Potters,” but others show up as “Potter (presser),” “Potter (turner),” “Potter (packer),” “Kiln-burner,” “Pottery decorator,” and “China ware moulder.” I’m not sure whether Dan could deftly throw on a wheel, or if he was more of a “pottery worker” who could make things in a mold, but I am fairly certain he fell into the latter category.

Dan’s career as a potter was not particularly long-lived. Around the time he showed up in the 1900 city directory, he married his wife, Clara, and the two had a son, Harold. By 1910, he was working as the manager of a novelty store; by 1920, he had become a jeweler–an occupation he would hold until his death. Around seven o’clock on the evening of August 28, 1925, Dan was driving his car near “the river” (I assume the Upper Cuyahoga River), when some bizarre “gasoline explosion” sent him into the water, drowning him. Whether the explosion came from his own gas tank or some outside fuel container, I do not know. He left behind his widow and his twenty-one-year-old son, who succeeded him in the jewelry business. His tragic end capped a life that saw the end of the great American stoneware industry, as mass-production took over and the specialized skills of the potter’s trade fell by the wayside. But his enthusiastic signature on a small piece he made in a mold shows that even for those who did not spend years in apprenticeships, learning to turn graceful forms, the universal desire to create–and to leave behind one’s work–was present.

A Note about Sources: As can be gleaned from my text, I used applicable Akron area censuses and city directories. The two quotes (one about Thomastown and the other about Whitmore, Robinsons & Co.) came from Fifty Years and Over of Akron and Summit County, by Samuel A. Lane (1892), pg. 986 and pp. 479-489, respectively. I found Dan’s tragic fate in his death record, which survives in the records of the Summit County Department of Health. Dan’s birth date, birth place, and marriage date were found in a strange place: Over ten years ago, someone found what was possibly Dan’s family bible in a basement amongst her grandmother’s effects. She had no idea how it got there, but she sought an answer on a popular genealogy message board.