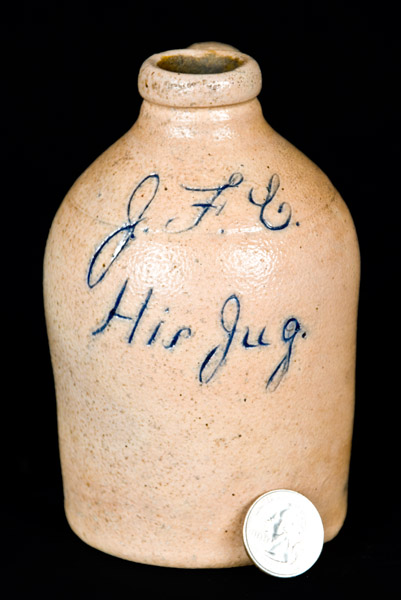 A small-sized stoneware rum jug with an interesting history will cross the block in our April 10 auction. Standing just 5 1/4″ tall, the jug was made for Brooklyn, New York sea captain, Julius Frank Caulkins, and bears his initials, along with the inscription “His Jug,” across the front. The vessel is consistent in form and color to stoneware produced in Caulkins’ home state of New York, circa 1860-1870.

“Energy” was wrecked on Hunting Island, South Carolina, on October 20, 1872. Fortunately, Caulkins, his wife, and his prized jug survived. Apparently, there was some discussion as to whether the jug’s contents played a role in the grounding of the ship. Caulkins account of previous damage sustained by “Energy” nine years earlier was printed in the February 1, 1863 of the New York Times:

DEAR SIRS: After encountering a succession of the heaviest gales I ever experienced, in which I lost sails, stove boats, twisted off the rudder-head, and sustained other damage, I was compelled to bear up for this place to repair damages. I shall proceed at once with the necessary repairs, which I hope will be completed in about 10 days, when I shall leave for your port.

After years of cheating death, an incident five years after the wreck in South Carolina would prove fatal for the captain. On January 3, 1877, Caulkins was lost at sea aboard the steamer, “George Cromwell,” which wrecked near Newfoundland. All hands were lost.

For stoneware enthusiasts, presentation pieces stir our curiosity when they come along. We often wonder who, exactly, they were made for, and why they were made for that particular person. Oftentimes, they are a relative of a potter or an important figure within a certain community. However, presentation pieces are often difficult to research, particularly when they are inscribed only with the owner’s initials. Fortunately for this little jug, it remained in the captain’s family. Having survived 150 years (and a shipwreck) Caulkins’ jug ultimately descended to his great grandson, its consignor. And while so much information on pottery is lost at sea, so to speak, this one’s colorful history has thankfully survived.