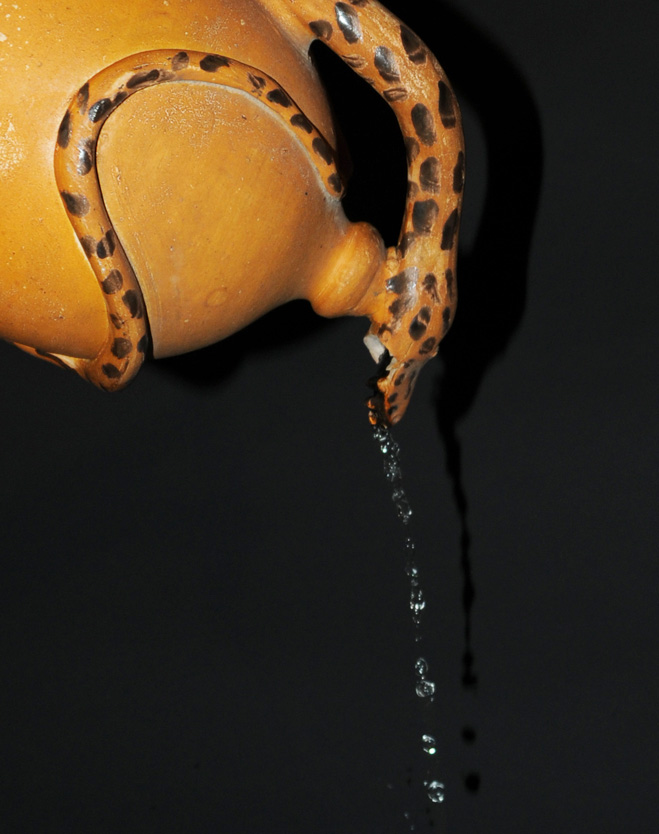 Last August, when my father, brother, and I, traveled down to Ft. Worth, Texas, to take possession of Mr. Young’s collection, an interesting stoneware harvest jug sitting on his living room table caught my eye. According to Young’s daughter, it had been purchased by Mr. Young at an antiques show in New York City during the early 1990’s, where it had been erroneously described as a piece of Indian pottery.

The form of the jug itself was in the typical domed or beehive style characteristic of 19th century American stoneware harvest jugs. Yet the vessel was made extraordinary by the addition of a large applied rattlesnake, which curved around the body of the vessel and formed its handle. I was really taken with the look of the snake. The style was different than that of the Kirkpatrick brothers, who produced the majority of 19th century stoneware snake jugs. The head was not executed in the usual flattened, closed-mouth form characteristic of the Kirkpatricks’ work. Instead, the animal assumed an almost comical expression, as its large open mouth curved into a slight smile, exposing numerous applied teeth. The creature’s body was further embellished with numerous slashes of brushed Albany slip, and its tail ended in a thin rattle. I believe the jug was possibly made in the Midwest, where the majority of harvest jugs and snake vessels were produced during the 19th century. Yet the subject matter suggests it is more likely a product of the Southcentral U.S., possibly Texas, where the rattlesnake was a very familiar animal.

While cataloging this piece, I was wondering about its unusual form. The vast majority of harvest jugs known have two spouts, one on each side. One spout, which was larger than the other, was designed for pouring liquid into the vessel. A smaller spout on the opposite side was designed for pouring liquid out of the jug. This harvest jug, however, only had one spout, and nothing on the other side. As I studied the jug, I noticed a hole inside the back of the snake’s mouth. Seeing that the snake’s head rested on the jug’s finial, I wondered if the hole might connect through the finial to the interior of the vessel. I decided to do a test with water. After pouring a small amount of water into the tubular spout on the jug’s side, I carefully leaned the jug over a sink. Voila! The water began to flow from the snake’s mouth! Hence, a smaller,

pouring spout did exist on this jug. . . only in the form of the snake’s head!

I am impressed with the ingenuity of this jug’s potter, whoever the person was. By the addition of a clay snake, he created a handle and a pouring spout, as well as significant decorative appeal to an otherwise simple form. I, for one, am sold on the piece! We’ll see what the bidders think on January 30th.