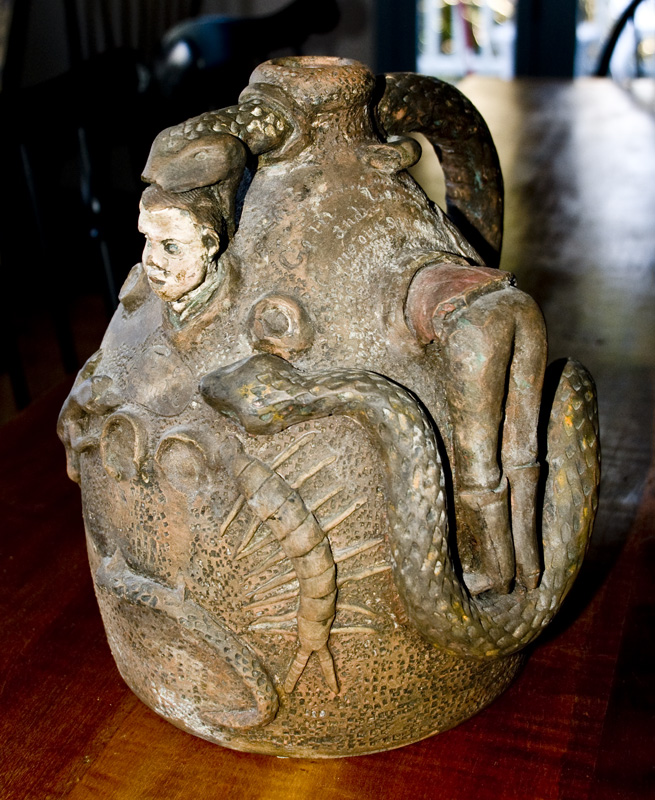 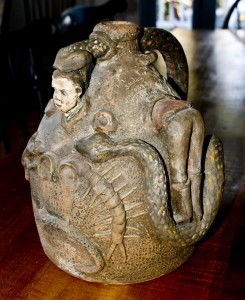 The Texas stoneware snake jug we will be selling on January 30 was one of the highlights of Kelly Young’s prominent collection of antique American utilitarian ceramics. We featured a picture of Mr. Young holding the jug on the title page of our current catalog (see below). The jug is also one of the most monumental examples of nineteenth century American folk art we have ever handled. A large snake forms the handle of the jug. His head protrudes from the other side of the jug top, biting the head of a man in a bizarre predicament–his lower half hanging out the side of the vessel. Another snake, a centipede, and a lizard also hug the surface of the jug. Several inscriptions highlight the scene. The two most prominent, as if written on plaques, are the maker’s inscription and the name of the pottery where the jug was made: “MADE & PRESENTED TO THE Fire Brick & Tile Company By J.L. STONE”  and “J.P. Johnson & J.W. Dillon / MANUFACTURERS/ OF / ALL KINDS OF / STONEWARE / Kosse Texas.” (Note that we cataloged the jug as reading “J.F. Johnson,” but after subsequent research and study, it reads, “J.P.”) 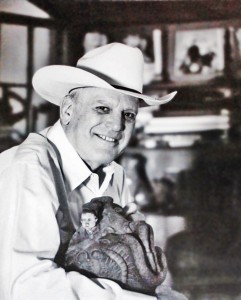 Kelly Young with one his collection's highlights.

Surrounding the unfortunate man’s body are the words “First Attempt,” topped by the phrase, “Go in lemmons (sic) and come out squeezed.” Words beneath the man’s head read, “The Result.” To the right of the handle, what appears to be a brick is incised “Timse’s Best,” probably referring to a worker at the brick company.

While trying to do further research and put this remarkable jug into better context, I noticed that another example of Stone’s work was acquired by the Bayou Bend Collection of the Houston Museum of Fine Arts in 2003. A large stoneware spaniel, measuring 11″ tall, was made in a style rarely seen in American stoneware. Instead, it was made in a manner most associated with redware figures of the time period–a dog on base, standing in the front, seated at the back, incised to create fur on the body and the ears. This Midwestern pottery dog that straddles the line somewhere between redware and stoneware resembles the Stone spaniel in its body shape, tooled fur to body and ears, and smooth face and legs. Stone’s dog differs, however, in its clear spaniel breed, its size, a large base (reminiscent of that seen on some molded King Charles spaniel figures made out of various types of pottery in the nineteenth century), and its clear stoneware clay body. No slip decoration–such as cobalt or manganese–decorates the dog. Prominently incised on the front of the base are the initials “J. L. S.,” referring to John L. Stone.

Stone’s snake jug is most closely related to very similar vessels made by the famous brothers, Wallace and Cornwall Kirkpatrick, at Anna Pottery in Anna, Union County, Illinois–so closely related, in fact, that part of my motivation in researching Stone was to try to tie him to that prolific duo (or at least figure out why something made in what could be called the “Anna Pottery school” was produced in Texas). 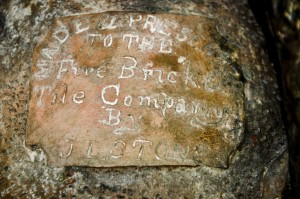 MADE & PRESENTED TO THE Fire Brick & Tile Company By J.L. STONE

According to an article in the March, 2003 issue of The Magazine Antiques, which describes recent acquisitions of the Bayou Bend Collection, Stone “came to Texas from Illinois and worked at a number of potteries in Limestone County, Texas, from about 1870 to 1900.” Diving into the federal census and also other period documents has enabled me to flesh out Stone’s life a bit more. Born on May 18, 1850 in Union County, Kentucky (according to a twentieth century passport application and immigration document), Stone was potting in Limestone County, Texas, by the time he was twenty years old–where, according to the 1870 federal census, he was clearly working with an Illinois-born potter named William C. Knox. Did Knox have ties to the Kirkpatrick brothers? Very possibly, but he had apparently left the state of Illinois sometime around 1855– judging by his children’s ages and places of birth–a few years before the accepted founding of Anna Pottery. Knox probably had trained as a potter in Illinois, but then spent some time in Kentucky before taking the helm of his own pottery in Hempstead, Texas (in Austin County, about 60 miles northwest of Houston) where he was working when the census taker made his rounds in 1860. About ten years later, Knox had moved about 100 miles up the road to Limestone County–probably in or near Kosse–and John L. Stone took his wife and baby boy and joined him there.

By ten years later, in 1880, John L. Stone was one of about seventeen potters or pottery workers operating in Kosse, and John Knox had turned, at least primarily, to farming. Although there was apparently one major pottery in the town at which the potters worked–Stone one of them–the census does not explicitly state who owned it. Turning to the Stone’s jug, then, which remains as a document of its own (albeit one made out of clay) we can use the census to try to interpret the pottery situation in Kosse during the time period. 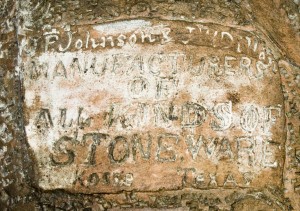 According to the 1880 census, J.W. Dillon was a merchant who apparently also owned hotel, which his wife kept. He was born circa 1842 in Georgia to immigrants from Great Britain. J.P. Johnson, on the other hand, was listed as a “Brick Mason,” born circa 1840 in Virginia. Based on the records I have access to, it seems very probable that sometime around 1880, Dillon and Johnson struck up a partnersh1ip and began manufacturing stoneware in Kosse; they probably also owned the Fire Brick & Tile Company, which seems to have been run, however, as a separate concern. Three potters, another pottery worker, and one brickyard worker were all residents of Dillon’s hotel in 1880.

Fleshing out the meaning behind the jug’s inscriptions further, the name “Timse” likely refers to a member of one of the Tims families, one a family of free blacks, who lived in the area. At least three free African-Americans were employed at the pottery in 1880, and it seems one of the Tims’s worked in the brick and tile company.J. Cole: 4 Your Eyez Only streaming 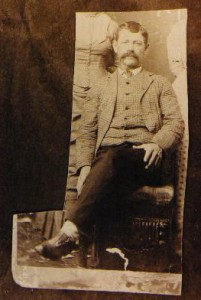 By 1892, Stone moved to Washington state, where he was probably working at some as-yet-unknown pottery, but returned to Texas, probably initially Limestone County, by the early 1900’s. In 1910 he was working at the Athens Pottery Co. in Athens, Henderson County, Texas, about 100 miles northwest of Kosse. Along the way, he had at least 11 children with two different wives. Sometime after 1910, as Stone ventured into his 60’s, he divorced his wife and moved back to Washington, moving on to Los Angeles, California, by 1923. It was in that year that he, citing a desire to travel to Central America, applied for a U.S. Passport. The passport document contains very interesting information on Stone: his exact birth date and county of birth; his father’s name; his occupation (“Potter”); his physical description; his address in L.A. It also includes a photograph of Stone as an older man–another photograph of John L. Stone as a younger man also exists.

But the most fascinating part of the document is a notarized statement attached to verify Stone’s claims about himself, and brings us back to one of my prime motivations in researching Stone’s life. It reads,

Personally came before me a Notary Public in and for said County and State aforesaid, C.E. Kirkpatrick, whom I know to be entitled to credit, and being duly sworn, on his oath deposes and says that his Post Office address is Anna, Union County Illinois age 71 years, and says that he is an … American Citizen a resident of Union County, that he has known John L. Stone as an American Citizen for Sixty years, and from what I know, and have heard he was born in Union County State of Kentucky on the 18th day of May 1850. That said information he has obtained from intimate association with John L. Stone and associates during said time that John L. Stone is known and has been known during said term among his associates as an American citizen. 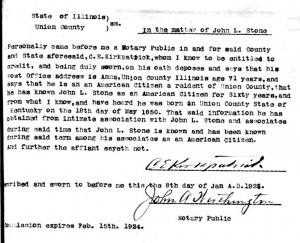 C.E. Kirkpatrick is none other than Cornwall E. “Cornie” Kirkpatrick, son of Cornwall Kirkpatrick, nephew of Wallace. Cornie’s statement provides a unique window into the interpersonal relationships of American stoneware potters in the nineteenth century. Incisive research into American stoneware paints a dim picture of a widespread network of potters and shops that, while financial competitors, often enjoyed strong bonds of friendship and cooperation, where potters worked at each other’s shops, and sometimes established relationships with many different manufactories in disparate places throughout their lifetimes. But this document reveals much not only about Stone’s development as a potter, but about a friendship that was probably a very common one amongst nineteenth century stoneware potters and artisans in general who shared a kinship based on their specialized knowledge of complicated crafts. 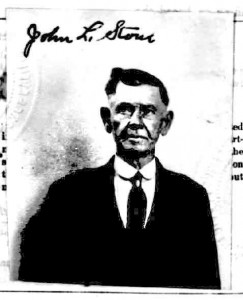 Cornie Kirkpatrick was born circa 1852, making him about two years younger than John L. Stone. While still a young boy, his father and uncle founded Anna Pottery in Anna, Illinois. Stone was born in Union County, Kentucky, less than 100 miles east of Anna. Kirkpatrick said he had known Stone for sixty years, establishing that Stone had arrived in Anna sometime circa 1863, when he was thirteen years old. The evidence suggests that Stone’s family moved to Anna around 1863 and that Stone apprenticed at Anna Pottery, learning the trade of potter that he would carry with him throughout his life, and became lifelong friends with Kirkpatrick in the process. Sometime in 1869 or early 1870, Stone left Illinois, possibly directly from his employ at the Kirkpatricks’ pottery, and went down to Texas, perhaps with the ultimate goal of striking out on his own. He met up there with another Illinois potter, William C. Knox, who was probably also associated with the Kirkpatricks in some way. Stone’s snake jug is closely modeled after similar jugs made at Anna Pottery, with men’s bodies forced through the jug in the same way; Stone seems to have literally grown up around such vessels and probably made them there, himself.

According to genealogist family members of Stone, John L. Stone died in 1928 in Limestone County, Texas. Unlike some potters who seem content to have produced mostly utilitarian ware and remain anonymous parts of larger potteries, Stone seems to have been essentially concerned with producing true art works that he signed, fired, then consigned to posterity. In this case, something he made about 130 years ago has helped us further uncloud our window into that time and into the artistic legacy of the Anna Pottery school of stoneware potters.

Author’s Note: The work of genealogists was invaluable in researching Stone’s life and discovering what I think is one of the most interesting documents I have ever come across while studying American stoneware. If you happen upon this blog because you also have information on John L. Stone or his family, please send me a reply or otherwise contact us. I would be more than happy to pass genealogical info along to these researchers.