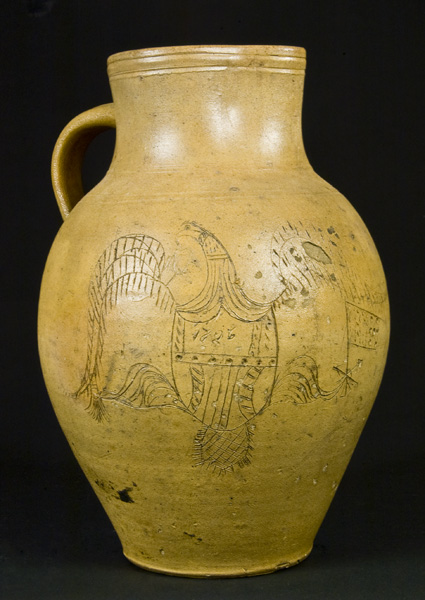 A stoneware pitcher consigned to our October 31 auction came to us incised with both a highly desirable, folky patriotic eagle decoration and an indecipherable maker’s name. We assumed it was the maker’s name, though differentiating a maker’s name or initials from those of a recipient or owner can be a difficult task at times. The first name of the individual in question, Henry, was easy enough to make out, but the last name was very difficult to read. It began with the letter R, but beyond that, the name was not incised deeply enough into the clay to be legible under the salt glaze.

None of the standard reference books on American stoneware contained an obvious answer to the riddle. But since the pitcher was clearly of Ohio or some other Midwestern origin, I recently decided to search some of my research notes for Ohio potters’ names that might fit the bill for this interesting piece. One name, Henry Rambo, jumped out at me right away; pulling up a good photograph of the name my brother, Luke, had taken, the letters were now almost as plain as day. Henry Rambo was, indeed, the name on the pitcher. But there was one problem: when this pitcher was made, the Henry Rambo in my notes probably wasn’t born yet.

The Rambo I had found was listed in the 1880 federal census as a 50-year-old potter working in Newton Township, Muskingum County, Ohio, in a stoneware/pottery hotbed that includes later art pottery centers of Zanesville, Roseville, and Crooksville. The pitcher, meanwhile, is prominently dated 1826 on the patriotic shield that covers the eagle’s breast. It was possible, though not likely, that this apparently early piece was actually made later than 1826–made, then, to commemorate an important event–and that this Rambo had made it. But thinking that this potter may have had a father by the same name, I went back to the 1850 census and had a look. There I found the maker of the pitcher–Henry Rambo, Potter, born circa 1804 in Ohio, and working in Newton Township.

Rambo was in good company in Newton. No fewer than 46 other potters or pottery workers were also living in this small town in 1850, eight of them other members of the Rambo clan; the oldest among them was George Rambo, probably Henry’s older brother, born a few years before him in Pennsylvania. Other Rambos included two other young Henrys and two men named Washington Rambo, one of them Henry’s son, who I feel bear mentioning solely based on their auspicious monikers–composed of the surnames of two of the great American military figures.

As is borne out by both cursory examination of subsequent census schedules, as well as the known history of the area as a whole, Newton Township continued to grow in subsequent decades as a major potting center. Nevertheless, its status as such has been more or less relegated to the waster pile of history. At the very least, those familiar with the American stoneware canon have probably seen a very famous Ohio jug made in support of the presidential ticket of James Buchanan and John C. Breckinridge; dated 1856, the jug is inscribed “Buck and Breck” and “Made by E. Hall Newton Township Muskingum County, Ohio, at W.P. Harrises Factory, Holesale and Retail Dealers in Stoneware for Joshua Cites.” (See John Ramsay’s American Potters and Pottery, 1947, page 73; and between pages 204 and 205, for photographs.) Based on the jug’s inscription, we know that at least one of the proprietors of the town’s stoneware shops was one William P. Harris, who is listed on the same page as Henry Rambo in the 1850 census, and for whom Rambo was probably working at that time. Harris was born in Delaware circa 1803, but judging by the ages of his children and where they were born, he didn’t arrive in Ohio until at least circa 1833. So where was Rambo working in 1826? We can be confident he was already potting in Newton Township, based on a biographical sketch of Henry Rambo’s grandson written in 1905:

James C. Rambo, a prominent general merchant of White Cottage, was born about a mile from the village on a farm in Newton township, October 31, 1863. He represents one of the old families of Pennsylvania, where lived his great-grandparents [Henry Rambo’s parents], who came from the Keystone state to Muskingum county, Ohio, during the pioneer epoch in its history. The great-grandfather entered land in Newton township and began the development of a farm in the midst of the forest. There he reared his family and it was in this county that Henry Rambo, the grandfather of our subject, was born. He remained here until 1849, when he went to California, attracted by the discovery of gold on the Pacific slope, but not realizing the fortune that he had anticipated he returned to Muskingum county and resumed farming operations here. James Rambo, father of our subject, was born in Newton township in October, 1827, and is now living in White Cottage. His entire life has been devoted to the pottery business and to farming. He has owned and operated two potteries in Newton township and through many years has carried on general agricultural pursuits. He is now practically living retired but owns thirteen acres of land in White Cottage, where he has a pleasant and comfortable home. His political support is given to the democracy and he is a member of the Methodist Episcopal church. (Past and Present of the City of Zanesville and Muskingum County, Ohio, by J. Hope Suter, page 677)

We can be reasonably positive that Rambo did not, in fact, travel to California in 1849; he very well may have gone prospecting at some point after the 1850 census was taken, but he was still firmly ensconced in Muskingum County when that happened.

The first pottery [in Newton Township], for stone-ware, was started in 1814, by Jacob Rosier, on a place now owned by — Rankin. The next was started by A. Ensminger, about 1828. …

The pottery of Joseph Rambo [possibly Henry Rambo’s son] is situated in the extreme northwest corner of Newton township, near Gratiot road, and was built in 1863, at an expense of about four hundred dollars, including his shop and kiln. Mr. Rambo has had to employ an average of three hands, including himself. The average number of gallons of pottery made, per year, has been about forty thousand, worth, in the market, from three and one-half to eight cents per gallon. The kinds of ware made consist of jugs, jars, pans, and churns, and they are remarkable for durability, neatness of pattern, and finish. The clay will also make a superior fire-brick. Mr. Rambo has some in his grate that has stood well for ten years. (Everhart, pages 344-5. Ramsay notes the existence of Joseph Rambo’s pottery, as well, on page 234.)

Was Henry Rambo working at Rosier’s pottery when he made his eagle pitcher? Perhaps, but he just as easily may have been working at some other unknown shop, or one of his own. In the 1830 federal census, Rambo is listed apparently living next door to his brother, George; the pair may have been running a family shop at that time. Either way, Henry Rambo’s pitcher is the only existing piece of his work I am aware of. It remains as an interesting and important reminder of a prolific potting community that clearly served the needs of Muskingum County and beyond for decades. Rambo’s descendants and family members carried his craft far into the nineteenth century; I am aware of at least one jug stamped simply, “J. RAMBO,” referring either to Henry Rambo’s son James, the aforementioned Joseph Rambo, or even possibly another family member. One of my favorite parts of studying American stoneware and redware is not only being able to flesh out the lives of long-dead potters, but to, on occasion, identify potters whose names have slipped into historical obscurity but whose memories can be brought back through researching the work they left behind. In this case, simply deciphering the last name of the mystery potter has helped illuminate, albeit very dimly, a potting community as a whole, and, as is the case with Ohio stoneware in general, my hope is that more work is done on this contributor to our American ceramic history.

One Reply to “RAMBO: Stoneware Potter of Newton Township, Ohio”