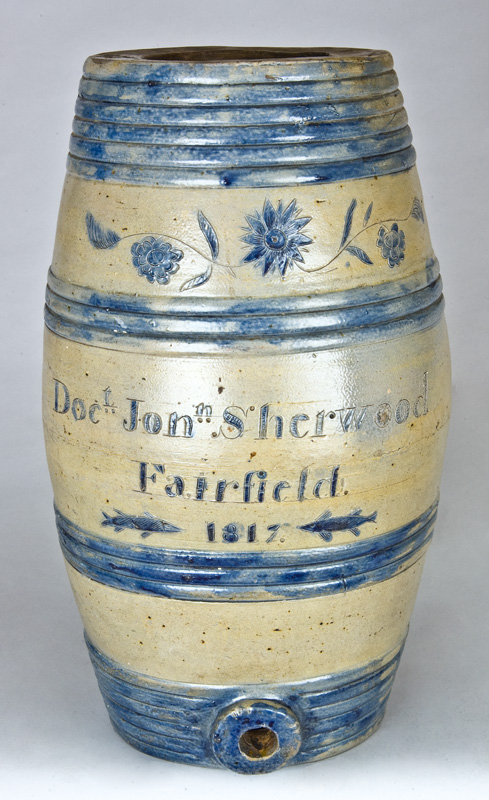 In 1817, Jonah and Calvin Boynton were in their second year of business together in Albany, NY. They imported high-quality New Jersey clay to Albany and, as Jonah Boynton boasted the previous year, they produced “as handsome real Stone Ware, as ever was manufactured in the United States… .” We have no way of knowing the exact number of stoneware vessels manufactured at the Boynton’s factory in 1817, but we do know that

they produced at least two exceptional keg water coolers with incised fish decorations that year. Both known examples were made at the Boynton factory, both bear the date 1817, both bear artistic incised decorations, both could have been produced in the same kiln firing and ironically, after not being offered for public sale for 192 years, both surfaced this year.

The first water cooler sold in March 21 as Lot 1 in our Spring 2009 Auction of Antique American Stoneware and Redware. Holding the world auction record for the highest price paid at a stoneware specialty auction ($103,500), this cooler is one of the finest surviving examples of Albany stoneware. Adorned with two incised birds and two incised fish filled with vibrant cobalt oxide, this two-gallon keg is also incised “Albany August 7, 1817,” above its spigot hole. The maker’s mark “BOYNTON” confirms the makers of this piece.

The second such water cooler, a three-gallon keg, will be sold in our October 31 auction. Recently consigned to us, this vessel was found roughly 20 years ago in a home in the Fairfield, NY, area and has never before been offered for public sale. Although unsigned, the striking similarity between this example and other known Boynton examples, notably the above-mentioned keg from our March 2009 auction, leaves no doubt of the makers of this piece. With cobalt-oxide equally vibrant to that on the two-gallon Boynton keg, the three-gallon example is also an exceptional representation of early Albany stoneware. A carefully-incised star-shaped blossom flanked by flowering vines adorns the front upper portion of the cooler and two fish face the incised date “1817” on either side.

But the most exciting aspect of the newly-discovered keg is the large incised name, which fills a large portion of the middle of the keg’s front. The potter carefully incised in bold block letters “Doct.. Jonn. Sherwood / Fairfield / 1817” onto the front of the cooler and research has revealed that this example is as historically significant as it is visually appealing. Dr. Jonathan Sherwood was an instrumental figure in the founding and

operation of the College of Physicians and Surgeons of the Western District of New York (commonly, Fairfield Medical College). Officially founded in 1812, the Fairfield Medical College was the eleventh medical school established in the United States and the first west of the Hudson River. Only surviving until 1841, when the new medical school in Albany became the preferred institution for studying medicine in the region, Fairfield graduated over 600 doctors throughout its brief existence.

Sherwood was a practicing physician in Fairfield and a founding member of the board of trustees at Fairfield Medical College. Additionally, he served as the school’s registrar and received an official medical degree from Fairfield in 1818. Evidence of Sherwood’s impact on the school survive to this day in the form of letters and a pamphlet that he authored. Several letters that he wrote to Dr. Lyman Spalding, Fairfield Medical College’s first president, are published in Dr. Lyman Spalding: the originator of the United States pharmacopoeia… by Dr. James Alfred Spalding. Most letters concern guest lecturers, ordering books, enrolling students and the like, but one letter published on page 232 of Spalding’s book illustrates the greater concerns of Sherwood and his contemporaries. Sherwood wrote in great detail of the United States military’s campaign in Canada and the subsequent death of General Pike along with 200 American troops when the British detonated hidden underground munitions. Additionally, Sherwood authored, as registrar, the pamphlet, “Ordinances of the College of Physicians and Surgeons, of the Western District, of the State of New-York.”

While most stoneware presentation pieces bear the names of people or institutions that carry little to no historic significance, this water cooler was made for a man about whom we know a great deal. While a presentation water cooler this early is highly unusual, the fact that the Boyntons made this example for a man who left a mark on history that is still remembered today makes this piece even more appealing. One can imagine Sherwood using this cooler in his office at Fairfield. And given the beauty and symmetry of this keg, I believe it was exactly what the doctor ordered.