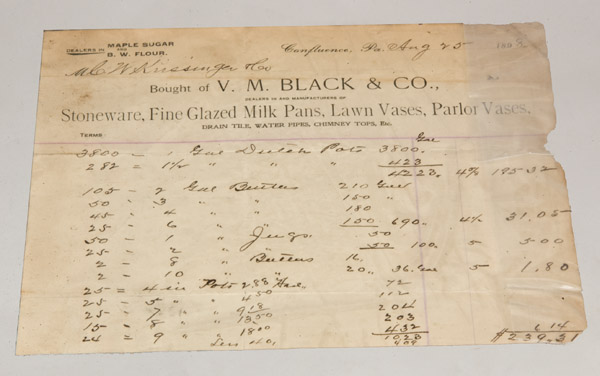 Stoneware produced by the Black family in Somerset County, Pennsylvania, is some of the most respected of all Southwestern PA wares. A stoneware pitcher impressed “G & A BLACK” graces the cover of Phil Schaltenbrand’s Stoneware of Southwestern Pennsylvania and many examples were featured in The Westmoreland Museum of American Art’s 2007 exhibition, “Made in Pennsylvania: A Folk Art Tradition.” According to Schaltenbrand’s excellent, ambitious book, Big Ware Turners, the Black family’s venture into stoneware manufacturing began in the early 1840’s, when James Black began making stoneware in Somerfield, PA. No signed examples from either this enterprise or Black’s subsequent partnership with James Hamilton (whose later work in Johnstown was stamped, “HAMILTON & PERSHING / JOHNSTOWN / PA”) are, to my knowledge, known. By the late 1850’s, Black’s sons, George and Albert, had taken over the pottery and at some point the ware was stamped with the simple mark, “G & A BLACK.”

Circa 1872 the two brothers dissolved the Somerfield business and went on to establish potteries elsewhere in Somerset County–George in Meyersdale and Albert in nearby Confluence. Albert’s pottery, at least, continued the stylistic tradition born in Somerfield–the similarity between known Somerfield and Confluence wares makes an attribution to one town or another difficult on many identifiable Black pieces. A signed Somerfield jar pictured on page 47 of Schaltenbrand’s Stoneware of Southwestern Pennsylvania and a signed Confluence jar on page 105 of Big Ware Turners demonstrate this.

While George’s family pottery in Meyersdale is known to have continued operation into the twentieth century, little has apparently been known about the fate of Albert’s Confluence manufactory. The recent discovery of a billhead dated 1898, however, shows that Albert’s family carried on their pottery tradition at least until around the turn of the century. (The history of the Black family potteries is found in Schaltenbrand, Big Ware Turners, pp. 104-6. For more information on Hamilton & Pershing, see Big Ware Turners, pg. 99)

The billhead, which boasts a large order of $239.31 including “3800 1 Gal Dutch Pots,” reads, “Bought of V.M. BLACK & CO., / DEALERS IN AND MANUFACTURERS OF / Stoneware, Fine Glazed Milk Pans, Lawn Vases, Parlor Vases, Drain Tile, DRAIN TILE, WATER PIPES, CHIMNEY TOPS, Etc.” A search of the 1900 federal census reveals that V.M. Black was Virgil M. Black, a 46-year-old merchant with a wife, Mary, and four children living at home. Living very near Virgil Black was 70-year-old Albert Black and his wife Esther. Very interestingly, by this time Albert had become a man of the cloth, his occupation listed as “Minister.”

The logical conclusion that Virgil M. Black was Albert Black’s son is proven by the 1860 census, which shows the 6-year-old boy living in his parents’ household. Albert, like his son many years later, was listed as a “Merchant,” probably referring not only to the pottery but perhaps more importantly a general store he operated concurrently with it. (Schaltenbrand, Stoneware of Southwestern Pennsylvania, pp. 46-7)

It is unclear if Albert Black was himself ever a potter. Both his brother and father are listed as potters in the census–James in 1850 and George in 1860–but the same cannot be said for Albert. The 1870 census, however, lists both George and Albert Black as merchants, and in 1880, the brothers’ first census since leaving Somerfield, George is called a “Grocerer” and Albert a “Dry Goods Merchant.” Also the first taken in Virgil Black’s adulthood, this census lists “Burgell” M. Black as apparently living next door to his father, and engaged in the same occupation as him.

The fact that the census taker never called Albert Black a potter does not, of course, rule out his undertaking of that occupation alongside his merchant activities, or at the very least in his youth. In fact, given his pedigree, it would be very surprising if he never turned a jar for his family’s stoneware manufactory. The same can be said for the subject of this article, Virgil M. Black, who is never referred to as a potter in existing census schedules. While existing censuses prior to 1900 show potters working in Confluence, the same cannot be said for that year, just two years after the bill head lists Black’s company as “dealers in and manufacturers of stoneware … .” By 1900, stoneware production had mostly evolved out of the familiar utilitarian art form into a much more mass-produced, industrialized manufacture, and workers in a large-scale pottery operation like Virgil Black’s establishment apparently was would not necessarily have been called “potters” in the census. We do not know for sure if Virgil’s shop was the same one that Albert had founded about a quarter of a century earlier, but it probably was. Virgil himself may have assisted in the operation of the pottery, but at this point the shop had probably moved far away from a shop where the potter-owner would turn his own pieces or at the very least assist in a relatively small operation of potters turning pieces on wheels with little variance from an art practiced thousands of years prior. And while Virgil’s pottery may have gone by the wayside between 1898 and 1900, this seems unlikely–we know, for instance, that the firm of V.M. Black & Co. was still in business in 1902, as it appears in that year’s edition of the Directory of American Cement Industries …, which lists Virgil’s company under “Dealers in Cement.”

No pieces exist bearing the mark of Virgil M. Black’s Confluence pottery, to my knowledge. Certainly many vessels were produced there–this single billhead lists a grand total 5,450 items. Besides the 3,800 one-gallon “Dutch Pots,” jugs, common pots, and “butters” in sizes leading up to ten-gallons, were all sold in this order. Black’s firm clearly continued the tradition of his father, operating essentially a general store with an adjoining pottery–the prominent statement at the top of the billhead, “DEALERS IN MAPLE SUGAR AND B. W. FLOUR,” makes this clear, as does the aforementioned reference to selling cement. Despite the absence of any known remnants from this clearly prolific manufactory, it is clear that Albert and Virgil Black continued to produce wares that served local Somerset County and beyond for decades after they left their well-known Somerfield establishment behind. As is often the case with researching American stoneware and redware, sometimes only a chance encounter with an unexpected document or piece of pottery enables significant enlightenment about a particular potter or pottery. In this case, this small document allows us to add another pottery owner to the history of the prolific Southwestern Pennsylvania potters–Virgil M. Black.