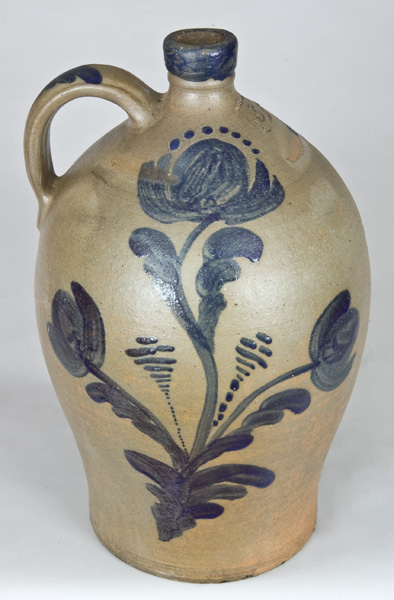 Many agree that John Bell was one of the most creative American potters of the 19th century, with a highly diverse product line unlike most of his contemporaries. His career spanned over fifty years in Hagerstown, MD, Winchester, VA, and Waynesboro, PA, and during that time his products included cobalt-decorated utilitarian stoneware, simple and high-styled redware in a wide variety of forms and glazes, various molded household objects, and molded and hand-modeled animal figures. Bell’s works are included in some of the nation’s finest private folk art and museum collections, including The Metropolitan Museum of Art, Henry Ford Museum, Museum of Early Southern Decorative Arts, and Winterthur. This icon of American folk pottery is perhaps best known for his distinctive dotted tulip decoration, usually consisting of circular or oval petal flanked by thinner petals and accented with a series of brushed cobalt dots lining the top edge of the blossom.

The dotted tulip motif is commonly found on Bell’s salt-glazed stoneware, often applied over a kaolin slip to improve the color of the clay and decoration. The design is also frequently found applied in manganese on the unglazed exteriors of some of his redware jar forms. It is also seen, albeit very rarely, applied in cobalt on Bell’s redware over a glazed surface, most notably on his celadon-glazed redware jugs and pitchers. One such jug bears the initials “C F B,” indicating it was likely made by Bell’s son, Charles Frederick Bell. Two other examples of this style can be seen on p. 31 of George and Connie Manger’s Pottery of the Shenandoah and Cumberland Valleys.

Two early examples of John Bell redware pictured in H.E. Comstock’s The Pottery of the Shenandoah Valley Region are decorated with a tulip design, which can be viewed as a precursor to his dotted tulip motif. Both were made before 1845, when he began producing stoneware.  A very rare large-sized redware jar, pictured on page 116, plate 4.96, is decorated with an extensive cobalt tulip design over a whitish slip. A phenomenal tin-glazed teapot, pictured on page 126, plate 4.132, is decorated with a similar, vertical design in brown and green slip. Both of these early examples feature a ball-shaped petal flanked on each side by two very thin petals. Neither exhibits the dotted embellishment known on pieces produced years later.

As is the case with most stoneware decorators, it is unknown what inspired Bell to make this his trademark decoration, though it bears a resemblance to PA toleware decoration of the period (Comstock, p. 117). It appears that Bell’s tulips did not go unnoticed. Dotted brushwork on the floral designs of stoneware produced by John Young from Harrisburg, PA, circa 1854, and Samuel Irvine  of Newville, PA, circa 1865,  indicate that Bell’s style was probably being emulated by competitors in the state.

We have been consigned a very fine example of tulip-decorated John Bell stoneware for our October 31 auction, a three-gallon jug marked simply “JOHN BELL,” which descended in a Hagerstown, MD family. Its taller, thinner  spout and shapely form, which is slightly more ovoid than most of Bell’s stoneware jugs, suggests it may have been produced in the very early years of his stoneware production in Waynesboro, PA, circa 1845 to 1850. The form closely relates to an extremely rare early Bell stoneware jug sold through Crocker Farm in May 2008, which bears the abbreviated mark “J. BELL.” It is pictured below. That jug is the only example of Bell stoneware we have seen bearing this early mark, usually found on redware pieces made before 1850. The clay color and cobalt band around the spout are also noticeably similar to the jug we will be offering in October, further supporting the notion that both jugs were made early into Bell’s stoneware venture.

Most noteworthy about the jug is its elaborate cobalt slip decoration extending vertically from base to shoulder on each side. The design consists of two long stems bearing two smaller tulips, swags, and stylized dashed brushwork, each culminating in a very large dot-embellished tulip at the shoulder. These tulips are two of the largest I have observed on a piece of John Bell pottery, measuring about five inches wide each. Such profuse decoration is rarely seen on Bell’s jugs, suggesting this piece may have been made for a special client. The decoration on a standard Bell jug of this size is usually relegated to the shoulder area, typically having a tulip on each side and a third design on the front. An example of a fairly typical Bell jug, made circa 1860-1875, is pictured below.

Another interesting feature of the jug to be sold on October 31 is a small incised design, composed of two leaves connected by a stem, which underscores the three-gallon capacity mark. It may have been impressed rather than incised, made as part of the jug’s three-gallon capacity stamp.  I do not recall seeing this treatment on another piece of Bell pottery.

Since handling nearly four-hundred pieces of Bell pottery from Waynesboro, PA, the work of this master craftsman never ceases to amaze me in its variety, quality, and artistry. It is clear that Bell’s purpose for this jug was two-fold, as was the case for so many 19th century potters. While designed to be used as a household good, the jug’s highly decorative nature  reveals Bell’s intent to impress its owner with a thing of beauty.