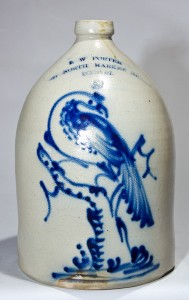 The pheasant-on-stump design used at the pottery of Julius and Edward Norton in Bennington, Vermont, is a well-known, but not often seen, decoration that is highly valued by collectors. While most examples are impressed with the makers’ mark, “J & E NORTON / BENNINGTON, VT,” the example we will be selling in our July 11, 2009 auction is unusual–stamped with advertising for a Boston merchant: “L.W. PORTER / 27 NORTH MARKET STREET / BOSTON.”

Like most major American stoneware potteries, many existing pieces of stoneware made at the Nortons’ pottery are stamped with the names of merchants and other traders for whom they made their ware. American stoneware ranging from ordinary bottles and jugs to ornate and specialized water coolers and poultry fountains bear the monikers of general merchants, liquor dealers, distillers, oystermen, butter dealers, ship chandlers, and other nineteenth century businessmen for whom stoneware was a marketable commodity, a necessary container for products, or a means of advertising.

Documenting the people and firms whose names have come down to us as impressions in clay both helps to more accurately date stoneware and better understand its diverse uses. In this case, by looking in period Boston city directories, we can ascertain what the Norton pheasant jug held and, fairly accurately, when it was made.

According to the 1860 federal census, Leonard W. Porter was born in Vermont circa 1820. In or about 1851, he went into business with George Sawin, a Boston wine and liquor dealer, and the partnership of Sawin & Porter began selling libations out of its store at 27 North Market Street, apparently just north of Quincy Market. The primary focus of the firm seems to have been wine, as nearly all references in city directories list the pair as dealing in “wines, &c.” Around 1858, the partnership dissolved, and Porter began running the business under his own name, out of the same location. Circa 1858, then, is the earliest possible date for the jug. However, by the following year, Porter had apparently attempted to expand his business, as he was now trading concurrently out of a second location on nearby Blackstone Street. He continued running both shops until about 1862, when he seems to have contracted back to the single North Market shop for about a year. By 1863, he had procured a new second storefront on Tremont Street. Porter continued to trade at both of these locations until about 1865, when he apparently sold or stopped leasing 27 North Market Street.download full film Get Out

Since only the North Market address is listed on the jug, it seems likely that it was made during one of the years when Porter was operating only one shop–around 1858 or 1862. The piece’s ornate design may, however, indicate that it was made just as Porter was moving out on his own, as a particularly attractive advertising piece for his new business.

Based on existing advertising pieces attributable to their pottery, Julius and Edward Norton frequently shipped large quantities of stoneware into Massachusetts and New York State. In a way that, for instance, Crolius’ Manhattan-made stoneware was probably well-known and regarded far outside New York City (as I discussed in the recent Commeraw article), Bennington stoneware seems to have been a respected brand amongst New Englanders and residents of New York State. In an 1859 Boston city directory, a merchant named David Wells ran a very interesting advertisement. Above the large, bold words “BENNINGTON STONE WARE” sit four renderings of stoneware drawn to look like J. & E. Norton’s wares–a jug with a floral decoration, a lidded jar with a cobalt bird, a tall-collared pitcher, and a lidded crock. Wells seems to have been confident that the Bennington name and the images of Norton’s stoneware, both which were probably quite familiar to his potential customers, would have drawn them into his store. For those who had never seen these Bennington wares, those same images were probably meant to show both the diversity of forms and attractive decorations available from the Nortons.

Wells may have been selling J & E Norton pieces stamped with his name (for instance, “DAVID D. WELLS / 27 HAVERHILL STREET / BOSTON”), the Nortons’ mark, or examples of each. While I am unaware of any existing vessels bearing Wells’ name, there are pieces stamped with the mark of an apparent successor to Wells: “WALKER & CO. / 27 Haverhill St. / BOSTON, MASS.” There were two ways to sell stoneware in nineteenth century America–empty (as a primary product for use in a home or business) or full of a drink or foodstuff (as a secondary item provided as a container). Acquiring stoneware by the former method appears to have been a straight-forward transaction. The consumer bought the ware directly at the pottery, or through an agent / reseller who marketed the pottery’s pieces. Sometimes potters advertised their stoneware for sale and as an aside noted that they would accept other materials in exchange–for instance, pine wood, which stoneware makers constantly needed on-hand for fuel. Stoneware bought from a merchant or other agent would be marked with either the potter’s or manufactory’s name, or the name of the merchant. Why, how, how often, and under what circumstances businessmen chose to have their names stamped on stoneware is a facet of American stoneware production that is not well understood. Acquiring stoneware as a container for beer, soda, sauce, turpentine, wine / liquor (as was the case with the Porter jug), and so on was, however, a transaction that is even less understood.

The Porter jug is a somewhat problematic example for this discussion because the ornate and highly decorative design was not the standard container offered for two gallons of wine. But for even a more standard vessel–say, a jug with no decoration, marked with a liquor dealer’s name and address–what was the arrangement between the dealer and the consumer? Did the buyer pay more to receive the jug with the liquor? If so, was this some sort of a deposit system, where any amount of money paid over the price of the alcohol would be refunded if the jug was returned? If the dealer would buy the jug back, would he do so if it was chipped or otherwise minimally damaged? Even if there was no actual deposit system in place, maybe the dealer encouraged the buyer to bring the jug back for a refill that cost only as much as the alcohol itself. If so, would a dealer accept a jug marked with the name of a competitor? In the case of the Porter jug, maybe the unusually ornate decoration was simply an added bonus to the consumer to encourage sales and function as an excellent advertising piece for anyone who happened to see the beautiful jug someone bought at Leonard Porter’s store. Or maybe a jug with this sort of design was thrown in when a customer bought a particularly expensive wine or liquor.

Questions and considerations such as these have not been extensively pursued, but I believe they are important ones to keep in mind as we study eighteenth and nineteenth century American stoneware. Examining this side of the art form enables us to better understand and explain the decorations and other attributes of these vessels that have survived from a time period when day-to-day commerce and social interaction as a whole was quite different from our own.