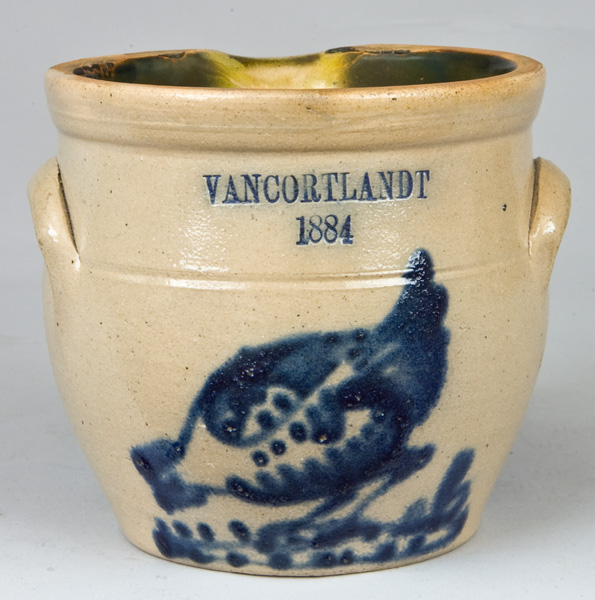 The chicken pecking corn motif, found primarily on pieces by several New York State and some New England makers, is one of the most recognizable designs in all of American stoneware. We’ve been consigned one of the most interesting examples of stoneware we’ve found decorated with this desirable scene for our July 11th auction. When I first saw this little piece, measuring just 5 1/4″ tall and 6″ wide from spout to rim, I was immediately taken with the size (especially considering the fact that this design is usually found on much larger pieces, usually between two and six gallons in size). This example holds only about a half-gallon.

While the reverse is decorated with a chicken pecking corn, the front features a design of a long-tailed bird perched on a stump. Based on the style of these designs, the pot was likely made at the Brady and Ryan pottery of Ellenville, NY, or the Adam Caire pottery of Poughkeepsie, NY. The form, like a cream jar with wide pouring spout, is highly unusual for New York State stoneware. We believe it is best classified as a batter bowl, with the tall, curved sides allowing for easy mixing. Its incredible condition suggests it saw little or no use.

The reverse bears the impressed name and date “VANCORTLANDT / 1884,” indicating that the pot was likely made as a presentation piece for a member of the prominent Van Cortlandt family of New York. Several Van Cortlandts are significant to New York state’s political history. Two Van Cortlands, Stephanus (1643-1700) and his brother Jacobus (1658-1739), served as mayor of New York City. Stephanus was also owner of large tract of land in Westchester County, NY, where Van Cortlandt Manor was built. This site can still be visited today, where tours of the many buildings and gardens are available. A second New York landmark, Van Cortlandt Park, which is located in the Bronx, is also named after Stephanus. A third Van Cortlandt, Frederick, built a mansion on this second site in 1748, which was used as George Washington’s headquarters for a period during the Revolutionary War. It was purchased by the City of New York in 1888, when it was converted into park land. Van Cortlandt Mansion now stands as a museum and includes many of the family’s original possessions. Since several Van Cortlandts were still living at Van Cortlandt Manor and Van Cortlandt Mansion during the 1880s, it is possible that the bowl we recently acquired was made for use on one of these two homesteads.

Regardless of who this piece’s intended owner really was, the exceptional size, form, and outstanding two-sided bird decoration, make it one of the more notable auction offerings of New York State stoneware in the past few years.