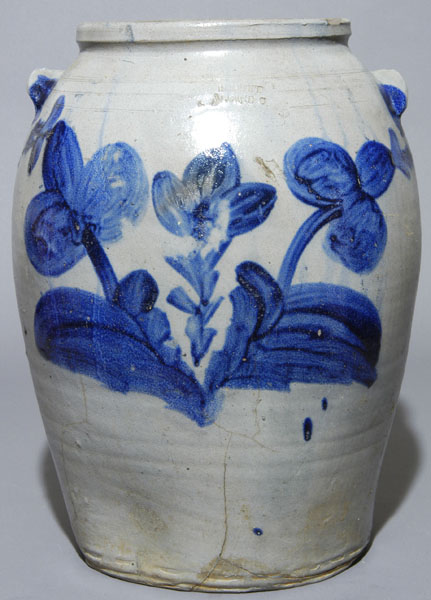 Stoneware signed with the mark of Washington, DC pottery owner Richard Butt is very sought after, and has been for as long as I can remember. It certainly appeals to collectors of stoneware made in nearby Alexandria, Virginia (once itself a part of the District of Columbia)–but as the most well-known, and some of the most aesthetically-pleasing, stoneware produced in our nation’s capital, products of Butt’s manufactory also draw interest from a wide variety of stoneware collectors who ordinarily focus their collections elsewhere.

Not much is known about the unfortunately named Richard Butt. Even less was known until two years ago when a unique piece of stoneware surfaced and was sold in our May 2007 auction. The email we received about the jar mentioned a hard-to-decipher maker’s mark that began with “R. BUTT” and ended in “Md.” We assumed the consignor had misread Butt’s “R. BUTT / W. City, D.C.” mark, but were shocked when the photos revealed a completely unknown and very exciting stamp: “R.  BUTT / Monty Co. Md.”

The discovery of a piece of Richard Butt stoneware with a Montgomery County, Maryland, maker’s mark revealed some important clues about this barely-documented pottery owner. Together with scant Washington, DC city directory and census listings, the following skeletal synopsis of Butt’s pottery career can be drawn.

Butt probably opened his Montgomery County pottery in the late 1820’s. The single extant jar from this manufactory appears to have been made about that time, and by the early 1830’s Butt had moved on to the District of Columbia. The first firm date for the existence of Richard Butt’s Washington, DC pottery is 1834, when he appears in the Washington city directory, as follows:

(Note that no city directories exist for the years 1831-33, making an exact starting year for Butt’s pottery problematic.)

Butt’s status as intendant (administrator) of Washington Asylum–an almshouse and penitentiary–led some to speculate that the inmates assisted in making the ware at his shop, but this seems like loose conjecture, at best. Some of the indigent may have been employed by Butt as menial laborers, but no large-scale, systematic employment of residents of Washington Asylum is likely.

One thing that we can be reasonably certain of is that Richard Butt was not a potter. The inconsistency in style and quality of the vessels, different maker’s marks, and Butt’s status as a DC bureaucrat all point to a situation most often seen in American merchant shops of the time period–Butt was an entrepreneur, and he owned his pottery while others made the ware for him.

We have been able to identify two primary marks on Butt’s DC ware. The most common (though still quite rare) mark is, “R. BUTT / W. City, D.C.” Slightly more difficult to find is the cruder “R. BUTT / W.” The W. City mark looks like a finished, proper maker’s mark made out of metal letters permanently affixed to a wooden or metal handle or slug. In general, most pieces stamped with one mark or the other carry stylistic similarities between examples.

I believe the W vessels were made before the W. City ones. While the cruder stamp does not necessarily date them to an earlier period, their decorations resemble very much those seen on Alexandria stoneware made in the early 1830’s. The same can be said of stoneware manufactured by the very mysterious Washington, DC potter John Walker, whose mark appears on about a dozen extant pieces. Walker apparently did pot for Butt for at least a brief period; he appears in the 1834 Washington city directory as a potter working near 8th and I Streets NW.

While the specific decorations seen on the W pieces are various, by the time the W. City mark was in use, probably by the late 1830’s, the cobalt designs seen on Butt’s stoneware had assumed a more standard decoration that has come to be associated with his pottery’s work–a “wing-and-flower” motif invented in Baltimore in the 1820’s. DC area stoneware potters used derivative versions of this Baltimore design very frequently, as did many other Virginia and Pennsylvania potters. But as a pottery that probably employed several different master potters over its lifetime, deviations from the norm most certainly occur. For instance, the decoration on a beautiful jar with the W. City mark, sold in our October 2004 auction, looks nothing like that seen on the bulk of R. Butt pottery.

A slip-trailed stoneware jar that sold in our July 2008 auction is inscribed in cobalt beneath each handle, “R. Butt.” Discovered about four years ago in the Hagerstown, MD area coated in gold paint, this remarkable piece is the only known piece of Richard Butt stoneware signed in this way, or any way other than a maker’s stamp. Its discovery raises several questions: Where and when was it made? Was it made in Montgomery County? If so, does the absence of a maker’s mark indicate that it was made around the very beginning of Butt’s career as a pottery owner? Was it made in DC? Who made the jar, and why was slip-trailing used instead of the normal brushed decoration? I, of course, do not know the answer to any of these questions, but my feeling is that it was made either shortly after Butt opened his Montgomery County pottery or his Washington, DC pottery.

To be exhaustive, I believe we have seen a stoneware jar impressed with the misspelled “R. BTT / W” at some point, but do not have documentation or photographs. I believe that jar was made around or during the same time period as the W pieces.

Sometime circa 1845, Enoch Burnett, a Baltimore potter who had spent time in Philadelphia–had, in fact, helped found the prolific Philadelphia Remmey pottery with Henry Remmey, Jr. in the late 1820’s–came to Washington and took over Butt’s pottery. I don’t know for sure how Burnett assumed ownership of the pottery, and whether or not Butt still owned it when he did so. Burnett would go on to operate the pottery for a few decades.

Given the historical evidence, I would date Richard Butt’s prolific Washington, DC pottery to a 15-year time frame–circa 1830-45. My hope is that this brief sketch helps to better explain a body of work that is essentially completely undocumented, and that I have put the R. Butt marks into their appropriate context. I have been researching Washington, DC stoneware off and on for about eight years now and hope, ultimately, to properly document all of the stoneware potters of our nation’s capital and give them the notoriety they deserve.