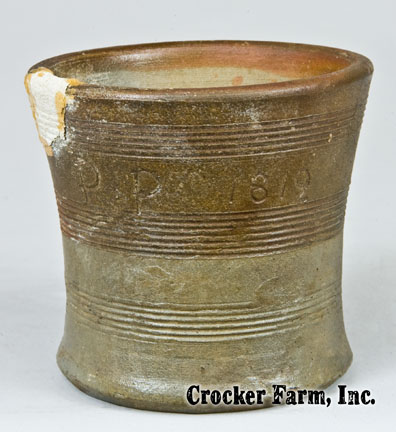 An important example of Baltimore, MD, stoneware was recently rediscovered at a small estate auction in Baltimore County. Known to the public only through a fifty year old black-and-white photograph, this stoneware vessel, a mortar made by Peter Perine in 1812, remained in the same unknown collection until it was sold unadvertised in January of this year. While the significance of this mortar had been forgotten with time, its rediscovery has shed light on the type of stoneware manufactured by Peter Perine and other Baltimore stoneware potters before Henry Remmey arrived in the city.

Written in 1959, John N. Pearce’s master’s thesis, “The Early Baltimore Potters and their Wares,” still remains the most significant written work on Baltimore’s stoneware potters. While a lot of its information has become outdated, it fleshed out the major figures in the early Baltimore stoneware industry and is certainly the most valuable secondary resource I am consulting while working on my book on Baltimore stoneware. In addition to information, this thesis contains black-and-white photos of several examples of Baltimore stoneware and redware, most of which belong to the Maryland Historical Society but some were credited to private collections. One such piece is a stoneware mortar made by Peter Perine incised “P x P 1812.” This piece always intrigued me since it is the earliest known dated example of Baltimore stoneware as well as the only known piece of stoneware made by Peter Perine, patriarch of perhaps Baltimore’s most important potting family. However, the black-and-white photograph in Pearce’s thesis withheld a lot of information about the quality of this mortar, how evenly Perine fired it, the quality of the salt glaze and even the method of decoration. All of these attributes testify to whether or not a potter was skilled at manufacturing stoneware. And without being able to examine this “lost” piece of stoneware, in doing research on Baltimore stoneware, the Perine mortar was more of a curiosity than anything else to me.

1812 is a very early date for Baltimore stoneware. While Thomas Morgan, Baltimore’s first stoneware potter, began operation in 1793, the beginning of stoneware production in Baltimore as stoneware collectors and scholars know it should be traced to the start of the War of 1812 and the subsequent American reliance on native manufacture. In 1812, Thomas Morgan drastically expanded his manufactory and took on William and Thomas Amoss as partners. In 1812, David and Elisha Parr opened their manufactory, initially producing only earthenware. And, most significantly, in 1812, Henry Remmey and his son, Henry Harrison, moved from the early American stoneware center of Manhattan to superintend William Myers’ Baltimore Stoneware Manufactory. It was the knowledge and experience that the Remmeys brought to Baltimore, I argued in my article on the Remmeys in Baltimore (see Ceramics in America 2004), which transformed the Baltimore stoneware industry into the well-respected manufacturing hub it remained throughout the century.

However, in January of this year, with the passing of a long-time antiques collector, a group of Perine family pottery, which had been hidden for fifty years, suddenly came to light. Among this group of pottery that was sold unadvertised at a local estate auction was the Perine mortar. Now in a private collection, the mortar tells the tale of the type of stoneware Baltimore’s homegrown potters were manufacturing at the time of the Remmeys’ arrival. This piece was not expertly fired. Perine probably did not get the kiln up to temperature, evidenced by the fact that the salt glaze did not adhere to the mortar evenly, the finish of this vessel ranging from glossy to matte. The mortar is well-thrown, evidence of Perine’s training as an earthenware potter. And perhaps most interesting, the mortar is decorated with an iron-oxide dip. Most often associated with the potteries of Frederick Carpenter and Barnabas Edmands in Charlestown, MA, and John Swann in Alexandria, VA, using iron oxide was a much cheaper method of elaborating a piece of stoneware than using cobalt oxide. The earliest Baltimore stoneware potters knew their role in the market was as a cheap, local alternative to the higher-quality stoneware manufactured in England and northern American cities, such as New York and Hartford, Connecticut. Decorating with iron oxide would have kept their costs down significantly and been more in keeping with their skill level as potters.

It is both exciting and puzzling that a piece of stoneware so well documented could wind up selling without fanfare at an estate auction. We have heard many similar stories as this one, where heirs inherit important stoneware and unwittingly dispose of it at yard sales, flea markets, unheralded auctions and the like. In other cases, keeping significant information, such as appraisals and photocopies from books, with important stoneware has often kept other pieces of stoneware from a similar fate. This example was fortunately rediscovered but how much rare and valuable American stoneware ends up getting lost in the shuffle?